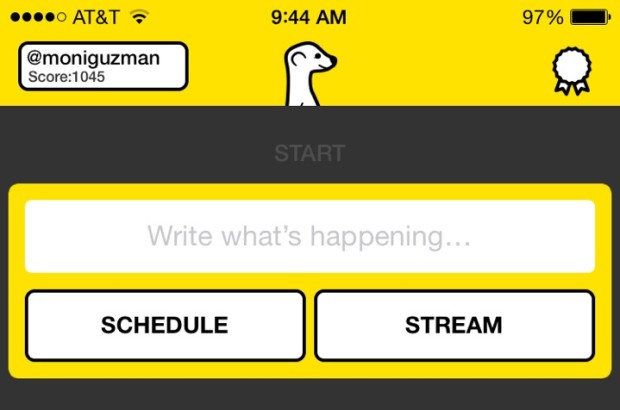 If you thought you’d seen the last of the social media app frenzies, this week proved you wrong.

Meerkat, the app that lets you live stream on Twitter with a tap, is two weeks old and already a giant — in the tech conversation, if not quite yet in reality.

“That is so bizarre,” a friend told me after I’d streamed from a bar in northeast Seattle Tuesday night.

I could tell you I’m withholding judgment. For any kind of social media app to succeed, it has to convince lots of people to pick up a new habit. That’s hard.

The revolution will be live streamed.

But I want this kind of easy, networked live video to make it — whether it’s through Meerkat, Periscope (which Twitter acquired this week) or anything else. And I think it will.

Take it or leave it, here’s what you ought to consider about Meerkat.

You open the app and see a text field and two buttons: schedule and stream. Tap “stream,” and two things happen at once: 1) A tweet goes out from your account with a link to your stream, preceded by whatever description you put in the text field, and 2) Whatever your phone is looking at gets broadcast live to the world.

This airtight integration with Twitter is more like a brilliant hijacking. And it’s the whole reason we’re even having this conversation.

@moniguzman I think this is the most personable use of a social platform I've seen yet. Agree, feels super auntentic

With Meerkat, no one has any idea.

Users are still getting to know the place and create a culture. Until then, it’s anything goes — except in one respect. While you have the option to save your stream to preserve elsewhere, ephemerality is the default. When streams are done, they’re gone.

From a populist perspective, this is what sets Meerkat apart. Right now, at least, there’s no more fun place to make a fool of yourself. Nor a more interesting place to see people being people, with nowhere to hide, and less judgment to fear.

@moniguzman Very first reaction was "this is creepy" until I watched and ultimately interacted.

Content is still king, of course, and many of the popular streams have featured tech elites like Gary Vaynerchuk and Mark Suster, nature eye candy like sunsets in San Francisco, celebrities like Tony Hawk and Jared Leto, or something a little WTF, like New Yorker Vincenzo Landino‘s all-night sing-alongs.

Dig in and you’ll find the seeds of genres. Behind the scenes streams from conferences, tech shows and newscasts. Crowd streams from sports games and concerts. Eyewitness streams from events like Monday’s Apple keynote and a prayer vigil Thursday night in Ferguson, Missouri.

But if this app is going to last, its heart must beat in the ordinary and everyday. Every stream is a window into someone’s world, and that makes even the short toe-in-the-water test streams hard to resist. Big eyes squint at the interface. Coworkers clam up when they learn they’re on display. This will get old, I’m sure. But for now, it’s real.

@moniguzman Meerkat like all the great platforms makes the world smaller

These are hardly unbiased observations. I’ve streamed myself teaching my son the planets, reading my favorite essay out loud, “unboxing” my box of Girl Scout cookie Tagalongs, practicing the guitar — which I’m no good at — and picking up my 4-month-old daughter after she gives that big, beautiful baby stretch.

You don’t capture moments on Meerkat. You free them. In that sense, other kinds of social media are middlemen.

You don’t capture moments on Meerkat. You free them. In that sense, other kinds of social media are middlemen.

Why take a picture or post 140 characters? If you want people to see the world through your eyes, just go ahead and let them.

Whatever you’re watching, it’s not hard to feel like you’re there. This week I watched some of the ping-pong tournament finals at Seattle analytics shop Simply Measured. On Wednesday, I paused in my writing to join @jaymini_minstry, who was eating chili for dinner, at her home in Nottingham, U.K.

The impermanence of these streams completes the effect. And the fact that you can save a stream if you choose to, frankly, feels like training wheels for a tech culture that no longer sees the point of using technology if it doesn’t record something.

No record means no pressure. Or at least, a lot less. Meerkat is a mashup of old tech, but this is what it achieves that’s new. We’ve been able to stream for years, but the capacity to do something is never enough for people to actually do it. You have to believe you’re good enough. That there’s no risk. No confusion.

This will all be out of date next week. South by Southwest is roaring in Austin. Who knows what madness that will shake up.

I, at least, will keep watching.

@moniguzman It's like The Truman Show, but with awareness

Thanks to everyone who joined me on a “meerkast” Wednesday night to talk about this column!

UPDATE: As of Friday night, just as the SXSW conference gets rolling, Twitter confirmed that it was cutting off Meerkat’s access to Twitter’s social graph, reports Buzzfeed. Twitter also confirmed its acquisition of Meerkat rival Periscope.

Buzzfeed notes that the decision will not kill off Meerkat, but will severely hamper its ability to grow.