Twitter has launched its own foray into the mobile live video streaming market with Periscope, an app that allows people to broadcast live from their iPhone. It’s similar to what Meerkat is doing on the iPhone and iPad, but backed by a very recent acquisition from Twitter.

The social networking company purchased Periscope in January, and continues to let the app operate independently, much like Vine. Users of the app can view streams from people who they follow on Twitter, find popular streamers like former astronaut Chris Hadfield and broadcast their own video, promoting it both within the app and on Twitter. 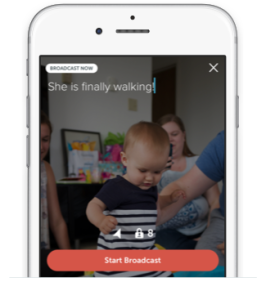 It comes on the heels of Meerkat’s meteoric rise in popularity. That app took the world by storm earlier this month, showing just how much people are craving the ability to stream video from their phones to complete strangers on the internet. Periscope makes a few improvements over Meerkat’s existing interface, like allowing people to view videos from users who they don’t follow in the event their friends aren’t streaming, along with support for sharing streams with friends through the app.

Of course, it’s hard to say now which live streaming app will reign supreme. Meerkat managed to make it out the door for a few weeks head start during South by Southwest in Austin, Texas, but it’s clear that Periscope has the more polished user interface and set of features. Periscope has also picked up buy-in from celebrities and other VIPs, including T-Mobile CEO John Legere, who live-streamed parts of his visit to one of the company’s call centers today.

In the past, popular apps that got an early head start have been replaced by ultimately more popular competitors (see Hipstamatic vs. Instagram), but it’s also possible that Periscope’s design doesn’t encourage enough people to make the switch.