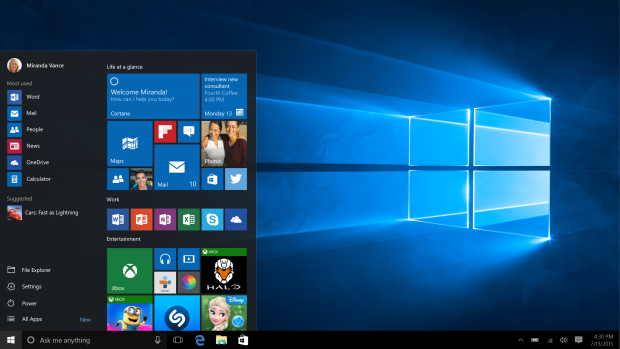 Windows 10 may not be available to you on its July 29 launch, Microsoft announced today. The rollout will extend over multiple days, coming first to beta testers in the Windows Insider program and followed by users who reserved a Windows 10 copy earlier this year.

The rollout will be “slowly scaling up after July 29th,” Windows and Devices head Terry Myerson said in a blog post. “Each day of the roll-out, we will listen, learn and update the experience for all Windows 10 users.”

The title of the post, “Windows 10: Preparing to Upgrade One Billion Devices,” shows the scale of this upgrade. Microsoft is slowing the rollout to make sure millions of users, all running slightly different hardware configurations, aren’t going to lose data or go through some other catastrophic operating system failure.

Microsoft is offering free upgrades to Windows 10 for people currently running Windows 7 and Windows 8.1. New stats show a surge in market share for Windows 7 in advance of the Windows 10 release, as companies and businesses position themselves to upgrade.

While Apple usually rolls out final updates to Mac and iOS systems over the course of a single day, it introduced a public beta program for Yosemite last year to test a wider range of systems before the actual launch. It will continue with that option for this year’s El Capitan and iOS 9.

Apple also has far fewer machines to update around the world, so servers are under less stress and an unforeseen problem wouldn’t affect as many people. Apple often doesn’t alert users to the update on day one, waiting until the initial early adopter rush settles down after a few days.

Myerson also announced that Microsoft will start sending Windows 10 to manufacturers soon so they can install it on new machines. Retailers will also be getting a build of Windows 10 to upgrade machines running Windows 8.1 that are still in their inventory. While Windows 10 Pro will be available along the standard license, Enterprise and Education versions won’t be available until Aug. 1.