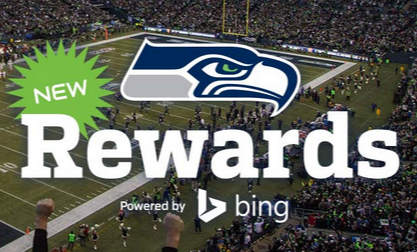 Microsoft is giving Seahawks fans a reason to use its search engine over competitors.

Bing teamed up with Seattle’s professional football team to launch a custom version of its Rewards program for those interested in winning Seahawks tickets, autographed memorabilia, a road trip to an away game, and more.

The program basically rewards users for conducting searches on Bing. The more you use Bing, the more rewards points you can collect to exchange for a chance to win prizes like these:

You can start redeeming credits on August 17. More information on the new deal is here, and you can access your Bing Rewards dashboard here.

Bing and the Seahawks have had a long-standing partnership over the past several years. The search engine has given away free tickets for people that use Bing in the past and the Bing logo is often seen around CenturyLink Field and the team website. This month’s training camp is also “presented by Bing.”

Microsoft is expecting search engine market share gains from Bing with the release of Windows 10, which has heavy Bing integration throughout the new operating system. The company’s search revenue rose 21 percent to $922 million in its most recent earnings report, with Microsoft crediting increased Bing search market share, and higher revenue per search.