Tune and Act-On Software managed to stay on Inc.’s prestigious list of the top 500 fastest-growing private companies in the U.S. for at least one more year, coming in at No. 459 and 492, respectively. This marks three years in a row for both startups — a tough feat for any growing company.

The 2015 version of the list was released today. It’s based on percentage revenue growth, so larger companies with more money to start with are going to have a harder time staying on top. Instead, this year’s list is full of up-and-comers that aren’t particularly well known in the Seattle region.

No. 1 for the region (No. 37 overall) this year went to Seeking Health, a Bellingham, Wash.-based nutrition supplements startup that was founded in 2011 and reported $6.7 million in 2014 revenue. No. 2 is Olympia, Wash.’s Smart Energy Today, No. 3 is Yakima, Wash.’s VitalWare.

There are a few familiar faces lower down on the larger Inc. 5000 list. Besides Seattle-based Tune and Beaverton, Ore.’s Act-On, MOD Pizza put up a decent showing, coming in at No. 773. Spoken Communications, the customer support call center software company that just raised $28 million, came in at No. 817.

Last year, 18 Washington and Oregon companies made the list, with Tune leading the bunch with an overall rank of No. 88.

Here’s the complete list of Washington state companies that made Inc.’s top 500: 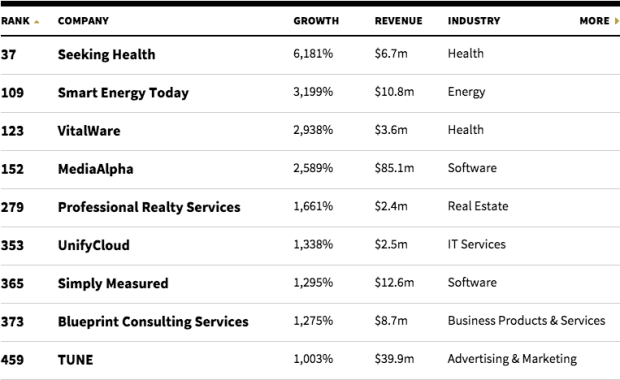 And here are those who made the list from Oregon: