How did Lane attract investors to a fast-growing company that happens to be headquartered in the middle of the country?

Beyond growing a successful software business with more than 120 hospital customers, Lane decided to rent a condo in Silicon Valley for a month, solely focusing his efforts on the fundraising process.

Interestingly, despite having started other companies, he’d never formally pitched a venture capitalist before.

Lane arrived with a dollar amount — $10 million — and a certain valuation in mind for his series B round — not unlike a plan of attack on the battlefield. Then, he went on a tour of the powerhouse firms, not wavering from his intentions.

We were super stubborn about the way we were going to do (the funding round).

“I felt it was more like me interviewing them, because I wanted a partner who would believe that we’d have to spend maybe $100 million, maybe $200 million and they’d have to get ready for that — so I wanted someone with some cojones,” said Lane, who spoke today at Columbus Startup Week. “Khosla had that, and they had the guts to get involved with us.”

Lane said they stuck to their “big vision,” and within those 30 days he had multiple term sheets, including one from Khosla.

“We were super stubborn about the way we were going to do (the funding round),” he said. “The venture capitalists would say: ‘Have you thought about this?’ And I’d say: ‘I don’t care about that. This is what we are doing. We are not changing.’ Some people like that, some people don’t and you find it very quickly and you go through them.”

That sort of big vision — and passion — certainly resonated with Khosla, one of the few Valley firms that didn’t ask him or the company to relocate to Silicon Valley. “It came up nearly every time,” said Lane. “They don’t make a habit out of investing in companies in Columbus, Ohio.”

An experienced entrepreneur, Lane admits that fundraising doesn’t always work that way. The key is to find the right fit and match, he said. 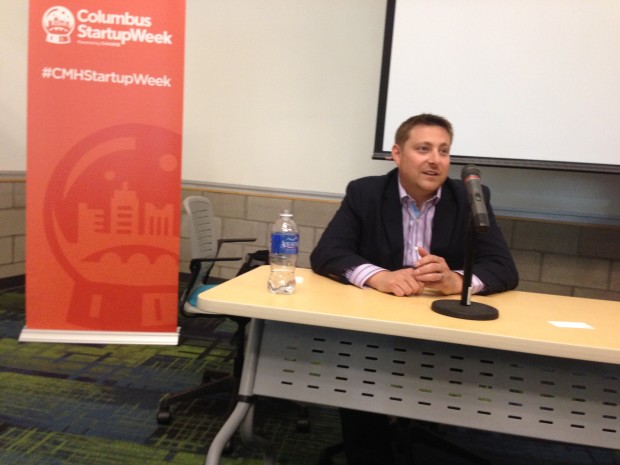 To emphasize that point, Lane shared a story from earlier in his business career when he tried to sell his company for $40 million in 400 days. He got several term sheets, and the deal was about to close when Lane saw something disconcerting.

“The company had denim shirts with their logo on it, and I was like: ‘screw this,'” said Lane to laughs. The deal was cancelled, and he then started talking to a private equity firm. Near the end of the process, the private equity firm wanted Lane to fire three key employees, so he walked away again.

Luckily for Lane, he ended up selling the company — Battlefield Telecommunications Systems — to the U.S. government.

“You got to make sure that culture fit is right,” he said. “Some things you just can’t give on. If you think something is right, like you don’t want to wear denim shirts with logos on it or you don’t want your friends to be fired because they didn’t do anything wrong, then you should stick with it and tell them no.”