Microsoft was the first guest Apple brought on stage to demo features for its new iPad Pro today. Microsoft Office executive Kirk Koenigsbauer showcased new features in the Office apps that work with the iPad’s stylus and split-screen features. In a post today on the Office blog, Microsoft went into further detail on the changes in its new Office apps.

Word, Excel, PowerPoint, OneNote, Outlook and Translator are all getting updated for iOS 9, WatchOS 2 and the iPad Pro. The changes are focused on Apple’s most advertised features, like third-party complications, split-screen multitasking and the Apple Pencil.

Almost every Office app is being updated to take advantage of split-screen multitasking. Users can move charts created in Excel seamlessly to a PowerPoint presentation, for example. Outlook will also open Office files in their respective apps in a split-screen window. 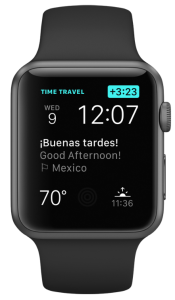 Microsoft is also taking advantage of the Apple Pencil, bringing inking to Office apps. Users can now use a host of new tools, including pens, highlighters, thickness control and a new color wheel, right on Word documents or presentations.

Apple Watch owners will be able to put Outlook calendar information right into the Watch face when third party complications debut with WatchOS 2 on Sept. 16. And a Translator complication will show users common phrases based on location and time of day. For example, if you’re in Mexico City in the afternoon, it’ll show you “Buenas tardes.”

All updates will be available when the respective OSes and products launch. With Apple’s iPad Pro directly competing with Microsoft’s Surface Pro line, it’s both surprising and refreshing to see the Redmond-based tech giant so quickly utilizing the new tech.