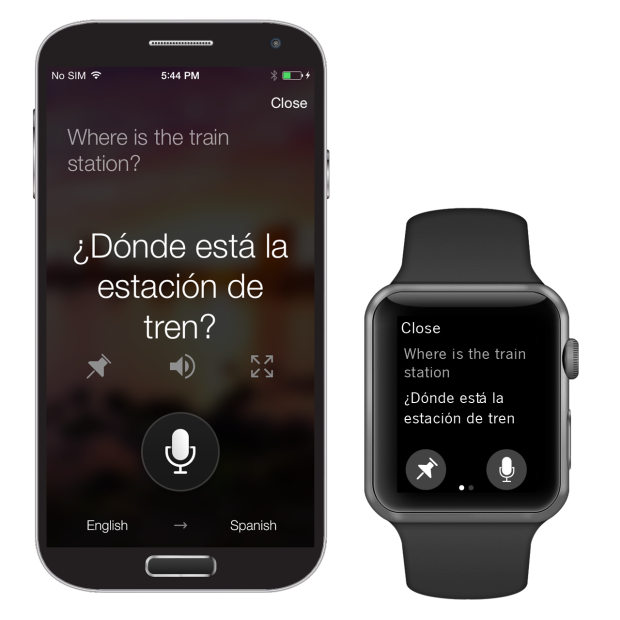 The benefit of a smartwatch is that you can keep your phone in your pocket when you’re out and about. With the recent release of the Microsoft Translator app, you can now leave your phone alone the next time you need a language translation.

Microsoft Translator brings the same translation engine that powers Skype’s new live translations to your Apple Watch or Android Wear watch. You can speak a phrase into your wrist and a few seconds later you’ll get the translation. The app can provide quick translations between more than 50 languages and can even speak the translated phrase back so you don’t have to worry about pronunciation.

There’s also a phone app for Translator that also lets you speak phrases you want translated. It also lets you type the phrase out and it can show the translation in a high-contrast, large font mode in case you’re not great at pronouncing the other language.

The app is really quick, translating almost as fast as you can speak. You’d expect it to be fast since it’s the same translation engine that provides live spoken translation for multilingual Skype calls, but I was still blown away by how fluidly it worked. As with any automated translation service, some of the resulting phrases are a little stilted or don’t quite fit in with natural speech, but if you’re just trying to get by in a foreign country the app should do fine.

One downside is that Translator relies on an internet connection to perform its lightning-quick response.

The phone-based app allows you to save more important phrases for when you’re away from the internet and those are also available from the Watch, but you won’t be able to translate new phrases if you’re not online.

While Google has provided a pretty good translation service on the phone for a few years, Microsoft beat the search giant to its own wearable platform with this release. The wrist is a logical place for a translator too, since you may not want to pull your phone out on the street in a foreign city.

Microsoft Translator is a free download from the iOS App Store or the Google Play store.