The table competition was intense yet again at the annual GeekWire Ping Pong & Anniversary Bash last week, as more than 100 players donned paddles and duked it out in an attempt to be named almighty ping pong champion.

Over in the expert division, it was the filthy forehand and super serves from perennial champion Valeri Kim of Akvelon once again proving unstoppable, as Kim defeated Manjunath Manoharan of Blue Kai/Oracle in straight sets.

The intermediate bracket championship was more hotly-contested, with Moz’s Ramon Recuero facing off against Shippable’s Seema Beniwal in perhaps the most exciting match of the day.

Though Beniwal had her brother Avi Cavale — the 2013 and 2014 GeekWire Ping Pong champion — offering advice on the sidelines, ultimately Recuero came out on top in an awesome three-set match — so awesome, in fact, that Avi live-streamed the entire match to Beniwal’s 2- and 4-year-olds, showing off mom’s ping pong chops. It was also notable that Beniwal was the first woman ever to advance to the championship match of the GeekWire Ping Pong tournament.

Both Kim and Recuero earned an Apple Watch for their efforts, courtesy of sponsor Fuel Talent.

Finally, in the foosball bracket, it was George Barta and Mohammad Ahmadnia of Collinear Group defeating Justin Elsberry and Aaron Regan of 47Degrees — who finished second for the fourth-straight year — to claim the grand prize from Best Buy.

We’ve posted the full results below. Thank you to the more than 150 of you who came out and participated, and to everyone else who showed up to party and cheer on your colleagues, friends, and family members.

If you want to relive the final matches — complete with very professional sports commentary from myself and John Cook — check out the videos further down on this post. 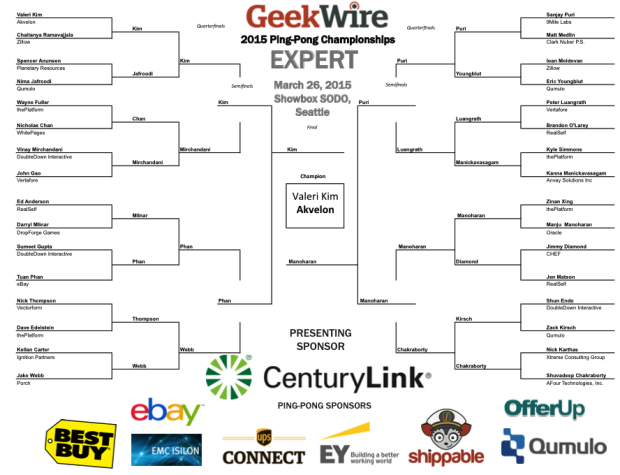 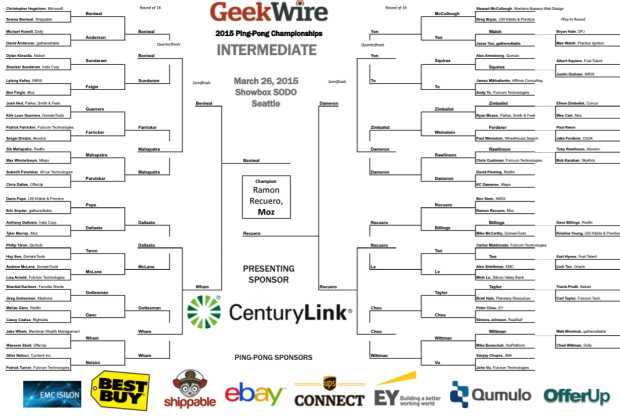 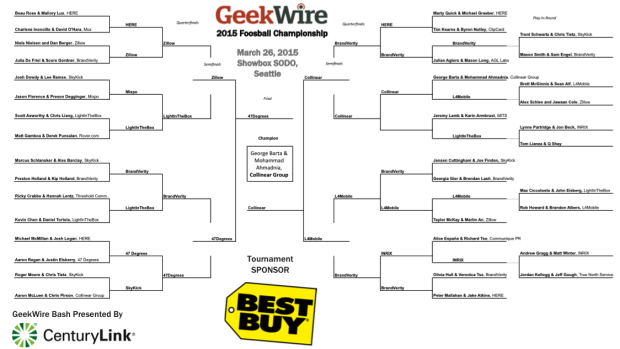 Here’s a look at all of the fun: