After three and a half years, Qumulo is finally coming out of stealth mode.

The Seattle startup today officially launched, about one month after it announced a $40 million Series B round led by Kleiner Perkins Caufield & Byers.

In a February interview with CEO Peter Godman at Qumulo’s downtown Seattle headquarters, GeekWire learned about the company’s history and detailed how the business operated a basic level.

Today, though, Qumulo is available to the public and unveiling more details about exactly what the company is offering.

“We said we would wait to launch until we had enough traction, user adoption, and proven success,” Godman said last week. “We are now ready to scale. We really want to reach more people and have them understand the problem we’re trying to solve.” 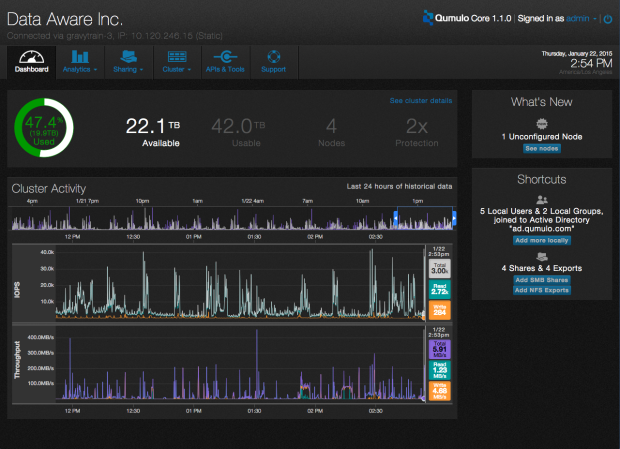 Qumulo Core, the startup’s software that incorporates real-time analytics, helps clients see exactly where and how their data is being stored and used. Godman said that this answers questions like, “What was my data like six months ago?” or, “What data do I need to back up?” or, “What is driving my data growth?” Qumulo Core can run on commodity hardware, dedicated appliances, or in virtual machines.

To date, Qumulo has raised a total of $67 million. The company has had a handful of initial customers from varying industries testing the product since August, including Ant Farm, Blind Studios, Sinclair Oil, Sportvision, TELUS Studios, and the University of Utah Scientific Computing and Imaging Institute.

“We tell them things about their data footprint that they previously couldn’t figure out,” Godman said.

Godman estimates that the size of the “unstructured data file” market today is around $25 billion. He said Qumulo is poised to make an even bigger impact than that of Isilon, another data storage Seattle startup that was acquired by EMC in 2010 for $2.25 billion.

“The opportunity immediately in front of us is far, far bigger than the one we had at Isilon early on,” he noted.

Qumulo has been able to attract employees from the likes of Wily Technology, Amazon Web Services, Google, Adobe and Microsoft. Godman said Seattle as a city — where companies with data storage expertise like Amazon and Microsoft call home — has “superior DNA” that is allowing Qumulo to grow.

“Seattle has a better set of central characteristics for building this sort of company than any geography in the world,” Godman said.

Learn more about Qumulo with our story from last month.