Now that the PayPal spin-off is complete, eBay is shutting down its same-day delivery service, called eBay Now, and three standalone mobile apps that were focused on sellers, fashion and car sales.

A year ago, denied rumors that the service was shutting down, saying it was simply scaling back its plans. But all it took was another year for the San Jose, Calif.-based company to change its mind again.

At this time last year, consumers in Chicago, Dallas, New York, and the Bay Area, were able to use the eBay Now app to place orders at nearby stores, such as Macy’s and Target, and receive their packages within an hour or two. The service cost $5. 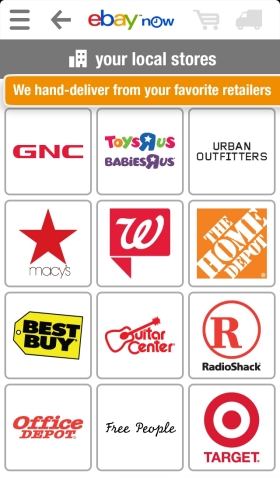 Today, in a blog post, however, eBay was very transparent about all of the changes it was making, and why it was shutting the service down: “While we saw encouraging results with the eBay Now service, we always intended it as a pilot, and we are now exploring delivery and pick-up/drop-off programs that are relevant to many more of our 25 million sellers, and that cover a wider variety of inventory that consumers tell us they want. We will continue to pilot scheduled delivery in the UK,” it said.

Earlier this month, eBay announced it had finalized the sale of its Enterprise business for $925 million to a group of investors headed by two private equity firms, Permira and Sterling Partners. That unit, which handled warehousing and logistics for third-party sellers, would have been the best fit for the service, not its general marketplace.

Indeed, an eBay spokeswoman told Cnet that same-day deliveries make more sense for items, like groceries or diapers — but not eBay’s core offerings, such as collectibles, antiques and used items.

The delivery service, while running on fumes over the past year, means one less competitor for others in the space, including tech giants, such as Amazon and Google, but also delivery specialists, like Uber or Postmates. In late 2013, eBay acquired Shutl, the UK-based marketplace that used couriers to deliver local goods within a couple of hours of a purchase.

The company is also cleaning house when it comes to mobile apps. It will be retiring three apps in the not too distant future: eBay Valet,, which allows you to sell items on eBay using an expert, eBay Fashion and eBay Motors. The three services will be rolled into eBay’s main app on iPhone, iPad and Android. The fashion and Valet apps will be decommissioned in the coming weeks, and the motors app will be discontinued later this year.