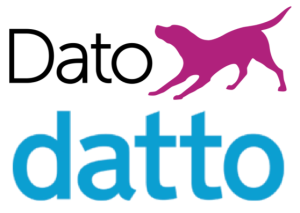 Seattle-based Dato has been deadlocked in a trademark infringement argument with fellow tech startup Datto for months, ever since Dato changed its name from GraphLab in January.

Datto, which has been offering data backup and recovery services from its Connecticut headquarters since 2007, first complained about Dato’s new name on January 30, just weeks after the company finished its rebranding, court records uncovered by GeekWire show.

The filings show Dato’s trademark application for its new name is still pending, so this kind of legal battle could have profound effects on the company.

Major rebrandings take a lot of time and money, not to mention the risk of losing name recognition and customers along the way.

Now, Dato is faced with the possibility of being forced to start the process all over again.

“We just don’t see a way your company can continue to use the DATO mark without causing confusion,” Datto wrote to Dato earlier this month, according to court records. “This back and forth has gone on long enough and our position is very clear.”

Dato CEO Carlos Guestrin told GeekWire the company doesn’t think Datto has a solid basis for its claims, but he declined to comment further because it’s ongoing litigation. Datto couldn’t immediately be reached for comment.

U.S. trademark records show Datto has owned its mark since at least 2013. But in the court records, Dato argues the two companies can coexist because they offer different products.

Dato says it focuses on machine learning and data analytics, while Datto helps companies recover lost information. Dato also argues both startups have highly sophisticated customers who research extensively before they purchase, so no one in the real world is actually going to get the two confused.

Datto has continued to see things differently as the companies have exchanged messages over the past eight months. The company defines its offerings more broadly as “business continuity cloud services,” which overlaps with Dato.

Founded by former University of Washington computer science professor Guestrin, Dato raised $18.5 million in venture funding from Madrona Venture Group, NEA, Vulcan and others in January, at the same time that it announced its name change.

The court case surfacing now was initiated by Dato, after Datto threatened to sue if the company didn’t stop using its new name by Sept. 21. In Dato’s complaint, filed that same day, the company asks the courts to rule that its trademark is legitimate and to bar Datto from future infringement claims.

“Dato intends to continue use of its DATO mark and remains confident the two companies can comfortably coexist,” the company wrote in its court filing.