Cutting ties with cable TV is not a simple or cheap.

According to new report released today, in order to get the content consumers are craving, they are having to source it from a handful of paid video services.

Consumer Intelligence Research Partners found that only 25 percent of consumers are using a single paid video provider. Meanwhile, half of all consumers admit to using three or more paid video services, including Netflix, Amazon, Apple, HBO, Hulu or Redbox.

“No one service truly dominates,” said Mike Levin, Partner and Co-Founder of CIRP. “While Netflix and Redbox each have the largest penetration among subscription and per-use services, even their customers use other services extensively.

Specifically, it found that 61 percent of consumers are using Netflix and 49 percent are using Redbox.Of those who subscribe to Netflix, 74 percent have at least one other subscription service, and of those who use Redbox, 73 percent of its users also have at least one subscription service. Other popular services include Amazon Prime at 30 percent; cable TV on-demand at 27 percent; and iTunes at 16 percent. 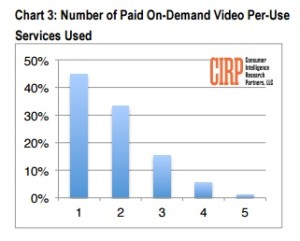 “Consumers need more than one on-demand service, and even more than one subscription or per-use service,” said Josh Lowitz, CIRP’s co-founder. “No single service meets all of a consumer’s needs, so they tend to create a ‘market basket’ that combines services.” 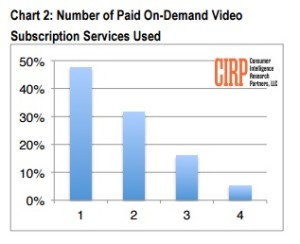 There’s no lack of options for video alternatives, either.

HBO is gearing up to launch a standalone video streaming service that does not require a customer to have a cable subscription; Dish TV recently unleashed Sling TV, which lets consumers stream live TV for a number of popular stations for a monthly fee; and then there’s Vessel, the new streaming video service built by the former Hulu founders that is charging a low monthly fee for advanced access to content normally found on YouTube.

As evidence of the many options, Outerwall, which operates the Coinstar and Redbox businesses, ended its Redbox Instant streaming venture with Verizon, which supplemented the DVD rental kiosk business with digital streaming subscriptions. It learned that its customers preferred to make a la carte purchases, rather than paying for another monthly fee.

Still, despite what Outerwall found, consumers appear willing for now to pull out their pocketbooks when it comes to indulging in the content they want to watch.