The venture capital market remained red hot in the fourth quarter of 2014, as U.S.-based companies raised a whopping $13.8 billion. That marked a 44 percent increase in dollars invested when compared to same period in 2013, according to a report out today from Dow Jones VentureSource. 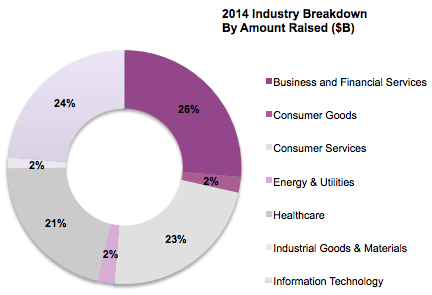 But an interesting trend continued to emerge in the fourth quarter. While venture money swelled, the number of venture deals actually decreased, dropping 20 percent to 814.

That means one thing: Rich startups are just getting richer.

Big deals such as that — along with others for Uber and Snapchat —  drove the investment totals higher.

In fact, you can see the trend playing out in the Seattle metro area as well. During the fourth quarter, there were just 21 deals  — compared to 36 for the same period in 2013. The 21 deals has been matched twice in the past five years, occurring in the first quarter of 2014 and the first quarter of 2011. And the 100 total deals in the Seattle area during 2014 marked a low point in the past five years.

However, investment totals in the Seattle metro area for 2014 came in at a hefty $1.24 billion — the highest total in at least five years. In fact, the investment in 2014 represented a healthy 27 percent increase over the $978 million invested in 2013 and nearly double the amount from 2010.

The Dow Jones report marks one of the first quarterly venture capital reports to be released, with others from CB Insights and the National Venture Capital Association set to debut in the coming days.

UPDATE: CB Insights released their full-year venture capital report Thursday morning, noting that venture capital financing hit the highest annual mark since 2001. It found that $47.3 billion was invested across 3,617 deals in 2014, a 62 percent increase in funding and an eight percent increase in deals compared to the prior year. Here’s a look at the funding and deal numbers from CB Insights.

And here’s a look at the breakdown of investment by state, with Washington state finishing fifth and Oregon finishing 24th.