Updated at 9:15 a.m. with new details on Prime and Prime Fresh in California.

AmazonFresh customers in Seattle, New York City and Philadelphia will get another three months of free grocery delivery without subscribing to a $299/year Amazon Prime Fresh membership. The move comes as the company adjusts the subscription model in California to make it more palatable to customers. 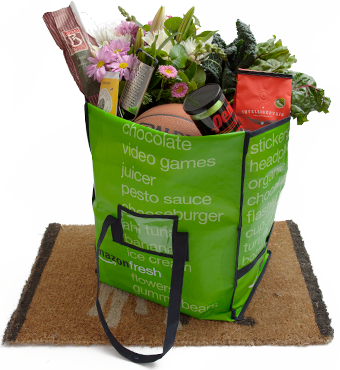 “We’re happy to let you know we’re extending your free access to AmazonFresh through September 2015,” said AmazonFresh in an email to customers in Seattle over the weekend. “At the end of this free period, you’ll need to sign up for a Prime Fresh membership (an upgraded tier of Amazon Prime) to continue enjoying free delivery from AmazonFresh.”

The $299/year Prime Fresh subscription tier was first launched in California. Originally, in markets where it was rolled out, a Prime Fresh membership was required to use the grocery delivery service at all. That was the plan for Seattle, as well, the company told GeekWire in December.

However, in recent weeks, Amazon has started experimenting with a new model in Northern and Southern California, making it so that standard $99/year Amazon Prime members can use AmazonFresh, too, as long as they pay a $7.99/order delivery fee. The $299/year Prime Fresh membership offers free delivery, making it more economical for heavy users. In either case, orders need to exceed $50. 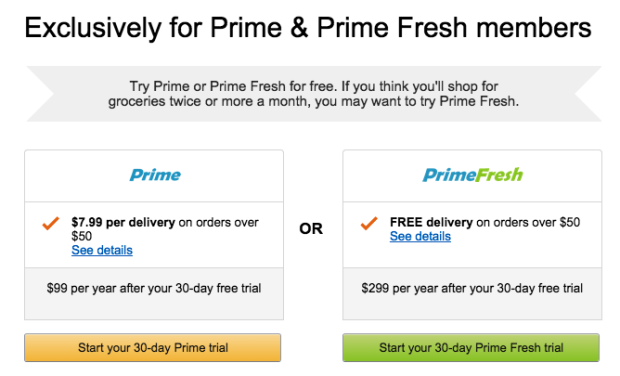 Amazon hasn’t yet responded to our request for comment, so it’s not clear if this model will be applied in Seattle, New York and Philadelphia, as well. But the delay in rolling out Prime Fresh in those markets gives the company more time to nail down the details.

In addition to email messages sent to Seattle customers over the weekend, notices on the AmazonFresh sites for New York and Philadelphia indicate that customers there will also will get another three months of free delivery, as long as they have a standard $99/year Amazon Prime membership.

AmazonFresh is competing against newer services like Instacart, in addition to grocery delivery from traditional supermarkets. Grocery delivery has historically been a difficult business, and Jeff Bezos said in the past that the AmazonFresh team was experimenting with the model to get the economics right.

With the delay, customers in Seattle, New York City and Philadelphia can continue to use AmazonFresh and get free delivery with a standard $99/year Amazon Prime membership, as long as they meet the $50 minimum order requirement. In addition, longtime AmazonFresh customers in Seattle have been able to continue using the service without an Amazon Prime membership for the time being.

We’ve asked Amazon about the reasons for the delay, and we’ll update this post when we hear back.