Amazon’s futuristic vision for a new generation of smart devices — gadgets that know what we need and automatically order it for us — could become more of a reality by the end of the year.

The company has been testing its Dash Replenishment Service, or DRS, with a limited number of partners since spring. But Amazon tells GeekWire that it will open the platform up within the next two months to any manufacturer who wants in. 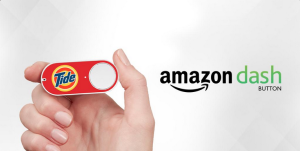 This is related to, but different from, Amazon’s Dash Buttons, those quirky little devices that stick to anything and order household supplies with a simple push. Those devices are built and sold by Amazon.

DRS, meanwhile, is Amazon’s backend service that lets other companies build their own Internet-connected hardware capable of ordering automatically off the company’s e-commerce platform.

Manufacturers will still have to work with Amazon to figure out what products they can program their devices to order, but manufacturers will be able to build their own dash buttons directly into just about anything.

It’s a move that could drastically expand what has so far been a niche program that some say could usher in a new world of automated e-commerce.

But the idea goes a lot further when you start thinking about how the technology could be incorporated into other pieces of hardware.

“That could be anything,” Rausch said, speaking with GeekWire after he took the stage at the Smart Kitchen Summit in Seattle. “That could be a folding lawn chair that orders beer from Prime Now. Who knows where it will stop.”

Just in case you didn’t catch that, Rausch is talking about a day when there could be a button built into the arm rest of your chair. You press it, and an hour later an Amazon delivery rider knocks on your door with a case of beer.

It’s a futuristic scenario, but one that Amazon is serious about making a reality.

The program has been in beta since spring, as Amazon has hand selected a limited number of manufacturers to be the first to try it out. Companies like Whirlpool and Samsung have used DRS to build everything from a washing machine that automatically orders laundry detergent whenever it’s running low, to a water pitcher that buys its own filter replacements.

But Rausch says that’s just the tip of the iceberg. Soon, anyone will be able to connect to DRS and he said there’s already a slew of manufacturers who are chomping at the bit to get in. He said there were certainly more than a few people in the room at the Smart Kitchen Summit already figuring out how they can incorporate DRS.

“I can’t share the specific details, but I think if you made something up right now — we’ve probably got an email from someone working on that project,” Rausch said. “It’s coming. It’s coming fast.”