It sounded crazy last year when Amazon first announced plans to warm its new office towers in Seattle with recycled heat from a nearby data center. But now the company says it’s not just possible — the system is already up and running.

Amazon won’t be fully moved into its new buildings for a couple of years, but its unique heating system is already ready to go. The company went ahead and invited local leaders and the press to come check it out on Thursday.

Amazon says there have been projects like this in other countries, but never before in the U.S., and never to heat such large office towers.

The system will eventually be used to warm up to 4 million square feet of office space at Amazon’s new campus, which will span three blocks bounded by Westlake Avenue, Blanchard Street and Sixth Avenue near downtown Seattle. That will include three office towers and the company’s famed glass “spheres.”

Amazon doesn’t own the data center where it’s getting the heat, but instead will purchase the energy at a discounted rate. The company says it will be four times more efficient than traditional heating systems, saving hundreds of thousands of dollars each year and about 80 million kilowatt hours of energy over the next 25 years.

The project was a complicated one because it required collaboration between Amazon, McKinstry construction, which designed the system, Clise Properties, which owns the Westin Building, and city officials who cleared all the regulatory hurdles.

“This is about many success stories,” Seattle Mayor Ed Murray said at the unveiling event on Thursday. “It’s about the innovation of Seattle’s business community; it’s about a city government that is becoming more efficient. But most importantly, it’s about collaboration between the two that shows folks we can get things done.”

Amazon and McKinstry officials took us on a tour of the system during the event, showing exactly how it works.

Everything starts at the Westin Building, which contains almost 34-stories of server space in a data center that routes virtually all Internet traffic for Pacific Northwest. All that equipment put off a lot of heat, so the building uses a hydraulic system to keep everything cool.

Meanwhile, Amazon uses a similar water system to warm its buildings across the street.

The problem was that the Westin Building needed a way to cool the hot water coming from its server rooms, while Amazon needed a way to heat the cold water it would use to keep its buildings at comfortable temperatures.

The Westin Building used to pump its hot water to the roof, where the excess energy was released into the atmosphere. That’s still how the system will work during summer months when Amazon doesn’t need any heat. But in the winter, the Westin Building will be able to sell that wasted energy to its new neighbor. 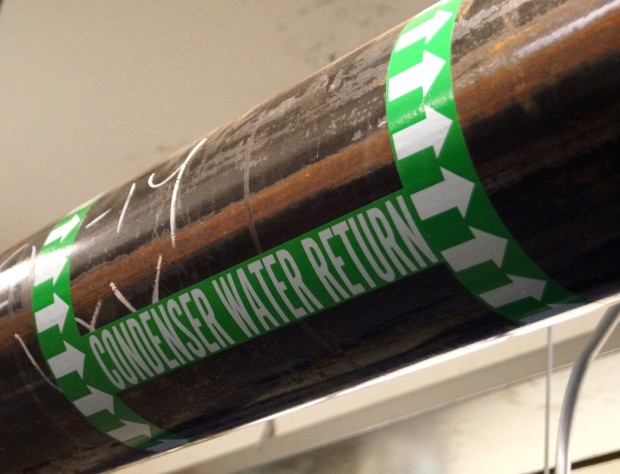 Thanks to a system dubbed the “eco district,” both buildings now pump their water into a “heat exchanger” in the basement of the Westin Building. Amazon’s water is heated so it can flow back under the street and into its nearby office towers, while the Westin Building’s water gets cooler so it can return the server rooms.

“It’s pretty simple, actually,” Amazon director of global real estate John Schoettler said. “It would only be in an urban center and innovating city like Seattle where something like this would happen. That’s one reason Amazon is proud to be developing its urban campus in the heart of downtown Seattle.”