The biodomes Amazon is planning for its new Seattle campus aren’t the only green aspects to the company’s expansion in the area.

The setup will be unusual. “Certainly there are other people using waste heat from server farms but you don’t hear a lot about tying it in with buildings across the street from each other,” said Seattle City Councilmember Mike O’Brien.

Amazon hasn’t been willing to talk about the plan but two resolutions, approved by the Seattle City Council on Monday, offer a few details and not only confirm the plan, but indicate it could be more ambitious than initially thought.

Eco District, an LLC formed by Clise Properties, which owns the Westin Building, and McKinstry, the construction and energy service company, are named in the resolution along with Acorn Development, Amazon’s development arm.

For now, the plan is to use the system to heat buildings on the three-block Amazon campus going up north of downtown Seattle, starting with a building Amazon plans to occupy at the end of next year. The resolutions approve the idea of running the pipes under and across Virginia Street, between 5th Avenue and 6th Avenue; and 6th Avenue, between Virginia Street and Lenora Street. In addition, pipes will run under and across Lenora Street, between 6th and 7th Avenue; and 7th Avenue, between Lenora and Blanchard Street. 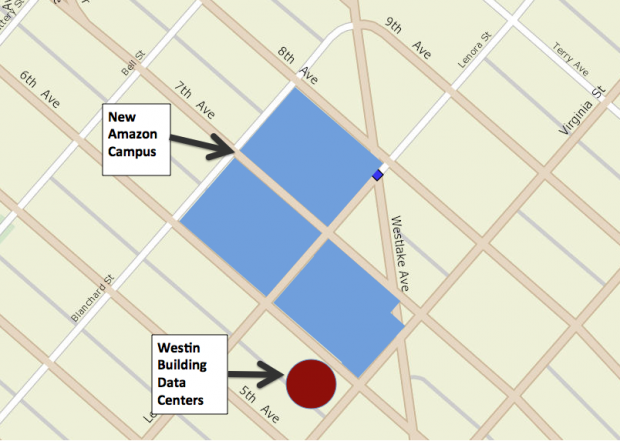 The resolution also opened the door to future expansion “in the area bounded by Virginia Street, Westlake Avenue, 8th Avenue, Bell Street, and 3rd Avenue.” The two new buildings for which Amazon recently submitted proposals are in these boundaries.

“My understanding is the waste heat from this facility is significant enough to support more than just those three,” O’Brien said. “I see this project as a first step toward what I hope to be a district wide energy system, that we can build off this as a catalyst.”

I see this project as a first step toward what I hope to be a district wide energy system, that we can build off this as a catalyst.
The city has identified a couple of other sources of wasted heat, including the data centers at Fisher Plaza and a sewer line running through South Lake Union, that it hopes building owners will tap into.

To encourage this kind of thinking, the city is offering credit to owners of new construction who build in so-called hydronic heat systems, O’Brien said. Such systems use hot water to heat buildings. Initially, a building can use on-site boilers to heat the water. But if pipes get built to bring hot water from a wasted heat source, like a data center, the building can be easily added to the system. Using water from otherwise wasted heat sources can require about a quarter of the energy required to boil water, he said.

The system is considered green because it reuses heat that’s otherwise wasted rather than requiring the generation of new energy. In addition, such local heat systems are efficient compared to electric which loses energy as it’s transferred from far-off power plants.

The Amazon setup riffs on the original way that many cities heated building, through a process called combined heat and power. Small electricity plants in cities generated excess heat and harnessed it, typically as steam, to heat nearby buildings.

O’Brien wasn’t sure what kind of arrangement Amazon, Clise and McKinstry set up. “Right now, the Westin Building data centers have to pay money to cool their machines,” he noted. They may get the cool water back in exchange for the hot water, which they currently also have to pay to offload.

Amazon has one more hurdle to pass. Following the approval of the resolutions today, it will have to do some engineering work to create a more formal proposal to the council. O’Brien said it would “likely” be approved.