Amazon beat Wall Street’s expectations with $23.18 billion in revenue and profit of $92 million, or 19 cents a share, in its second quarter earnings report, released just now. Revenue was up 20 percent from the same quarter last year.

Analysts surveyed in advance by Thomson Reuters had expected Amazon to report a loss of 14 cents on revenues of $22.4 billion. The company had posted a net loss of $126 million in the second quarter of last year. 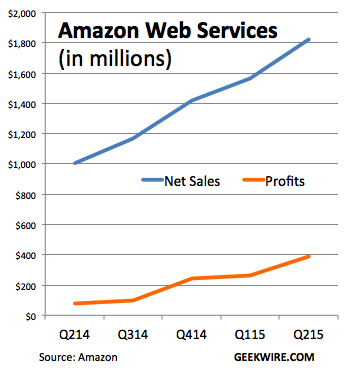 Revenue in the Amazon Web Services cloud division rose to $1.8 billion, up 81 percent from the $1 billion reported by the company a year ago. Operating profit grew by more than 400 percent, from $77 million to $391 million.

Investors reacted to the strong earnings in after hours trading on Thursday, sending the company’s shares up more than 17 percent immediately after the news release.

Amazon also used the earnings report as a chance keep talking up Prime Day, the sales holiday that required a membership the company tried for the first time on July 15. The company has continued to call the promotion a resounding success, even as some customers panned the deals.

Brian Olsavsky, Amazon’s chief financial officer, reiterated during a media call on Thursday that it has been “thrilled” with the promotion’s results, saying every metric points to good things. The company says more new members tired Prime on Prime Day than on any single day in Amazon history.

The sales from Prime Day came after the second quarter, so they weren’t included in Amazon’s results reported today, but Olsavsky said they are reflected in Amazon’s guidance for the third quarter. The company says it expects revenue between $23.3 billion and $25.5 billion, or an increase of 13 percent to 24 percent.

The following forward-looking statements reflect Amazon.com’s expectations as of July 23, 2015, and are subject to substantial uncertainty. Our results are inherently unpredictable and may be materially affected by many factors, such as fluctuations in foreign exchange rates, changes in global economic conditions and customer spending, world events, the rate of growth of the Internet and online commerce, and the various factors detailed below.