As recently as 2011, according to Amazon, someone at Appistry Inc. registered the genomics data technology company to use Amazon Web Services. As part of that process, the person clicked to agree to the standard AWS customer agreement. 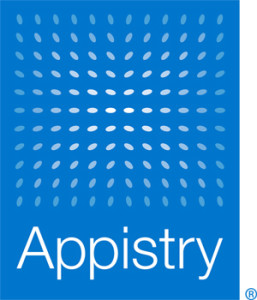 Section 8.5 of that 6,000-word agreement includes this sentence: “During and after the Term, you will not assert, nor will you authorize, assist, or encourage any third party to assert, against us or any of our affiliates, customers, vendors, business partners, or licensors, any patent infringement or other intellectual property infringement claim regarding any Service Offerings you have used.”

Amazon is now citing that clause to defend itself against a patent lawsuit filed by Appistry — a dispute that traces its roots back more than a decade, to meetings where Appistry pitched Amazon on licensing its high-performance computing technology, according to court documents.

The Seattle-based company denies that AWS infringes on Appistry’s patents. But even if the claims of infringement were valid, Amazon says, the case should be thrown out because Appistry, by clicking to confirm that AWS agreement, prevented itself from pursuing any patent claims over AWS, in perpetuity. 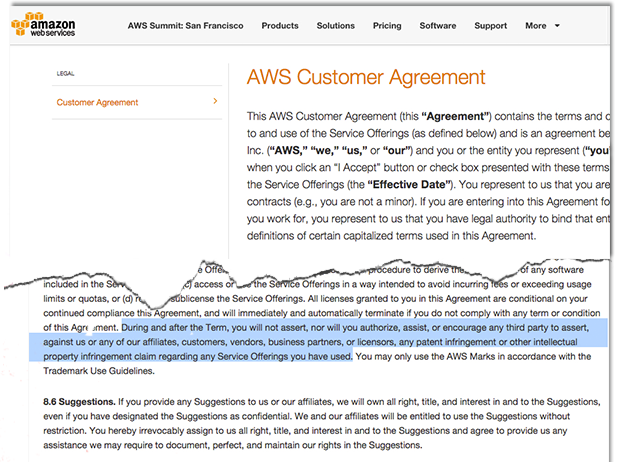 “This argument is absurd and a classic case of ‘one of the largest online commerce companies in the world’ trying to use its market power to obtain intellectual property rights for which it has never paid and to which it is not entitled,” responds Appistry in a court filing.

Appistry’s opposition to moving the case to Washington state

The case spotlights a little-noticed clause in the standard customer agreement for Amazon Web Services, the cloud computing platform used by a large number of companies around the world. Amazon Web Services last fall reported 40 percent year-over-year revenue growth — making it the “fastest-growing enterprise IT company in the world” — with more than 1 million business and governmental customers.

Amazon Web Services has grown large enough that Amazon is preparing to break out AWS results for purposes of financial reporting.

The court has yet to rule on Appistry’s patent claims, but Amazon won a preliminary victory last week when a federal judge in Missouri — Appistry’s home and the original venue for the suit — agreed to transfer the case to federal court in Seattle, based on another provision of the same standard customer agreement, which calls for any dispute to be tried in federal or state court in its hometown.

Opposing the move, Appistry had argued that its patent infringement case against Amazon didn’t have anything to do with its own use of Amazon Web Services.

The judge turned down that argument, and noted that Appistry’s case was weakened by the fact that it continued to use Amazon Web Services after learning about the clause.

Appistry’s “argument that these were ‘take it or leave it’ agreements and were non-negotiated loses much force when taken together with the fact that Plaintiff continued to use the services provided,” wrote U.S. District Judge Henry Edward Autrey, agreeing with Amazon’s request to move the case to Seattle.

System and method for territory-based processing of information

The judge added, Appistry “cannot accept the benefits only until the Agreement requires something it does not favor and then attempt to sidestep the obligations by claiming the Agreement was a ‘take it or leave it,’ non-negotiated one sided Agreement forced upon it by an overpowering giant attempting to use its substantial market power.”

He noted, however, that “the transfer of this action in no way inhibits Plaintiff’s cause of action on its allegations of patent infringement; it merely transfers the action with no determinations as to the merits of the allegations.”

These types of agreements are known in legal circles as “click-wrap” agreements, after the “shrink-wrap” end user licensing agreements that came with traditional packaged software. In reality, as we all know, most people click on them without reading every word, or any word.

Amazon Web Services is, by many measures, the leader in cloud computing, with 57 percent of technical professionals saying in a survey released last month that they run applications on AWS, up from 54 percent a year ago.

These types of patent protections were more common in the industry five to 10 years ago, but have largely fallen out of favor because of customer backlash.

Amazon’s biggest cloud competitors, Microsoft and Google, do not include patent protections in their standard cloud agreements. Barb Darrow, reporting on the Appistry case for the (now-closed) tech news site GigaOM in January, cited legal experts who said the unusual aspect of the Amazon agreement was the provision extending the legal protections beyond the life of the contract, by stating that it applies “during and after the term.”

Amazon may negotiate custom agreements with large enterprise customers, with different terms, but smaller companies using Amazon Web Services may not be aware of the provision, even though they’ve agreed to it by signing up for cloud services from the company.

We’ve contacted both Amazon and Appistry for comment on the latest developments in the case, which is now proceeding in U.S. District Court in Seattle under federal judge Marsha Pechman.