Editor’s note: Zillow CEO Spencer Rascoff delivered this keynote address to kick off the GeekWire Awards, presented by Wave Business Solutions, Thursday night at EMP. You can see all of the winners from the big night in this post. Here are Rascoff’s prepared remarks.

Thank you for that awesome introduction.

And congratulations to all of this evening’s honorees and nominees—startups and upstarts, all of you…upending, well, just about everything.

Tonight, we gather to celebrate you.

The misfits.  The rebels.  The troublemakers.

The ones who drop out of prestigious colleges and business schools.

The ones who decline offers at Goldman and McKinsey.

all for the chance to be mocked on HBO.

SO WHY WE DO IT

Well the thing is…All of these sacrifices…

…all of these questionable tradeoffs…

They all beget a simple—staring-back-at-you-in-the-mirror—question:

Why do we disappoint our parents with seemingly-bad decision after bad decision.

Exhibit A: My mom, six months ago, on the phone… “Spencer, when are you going to finaly go to business school?” Mom, I think that ship has sailed.

Why do we force our grandparents—in the middle of their water aerobics in Boca—to rationalize our jobs to their friends?

My grandmother: “I think Spencer does something in computers.”

Yes, we are misfits.  Rebels.  Troublemakers.

But maybe… just maybe… you’re something else, too.

Visionaries with the rare passion to pursue something with relentless, maniacal focus.

With the unlikely faith to keep at it, in the face of near constant failure.

Visionaries emboldened by the companionship and camaraderie of other, fellow zealots… true believers who offer strength and support, when it’s in greatest demand but lowest supply.

Like the Kerouac line goes… some may see us as the crazy ones.

But when I picture some of the companies here tonight —when I look into your faces—I see genius.

When you think about it…

It takes genius to invent a special language that the Muggles will never understand.

It takes genius to master the seminal languages of the 21st century.  Not French, Spanish, Latin, English, or even Mandarin… but Python, Ruby, C++, and Java.

Giants neither of the cloth nor the Congress… but of the keyboard… software developers that reimagine the way we create, connect, collaborate and communicate.

IT TAKES A COMMUNITY 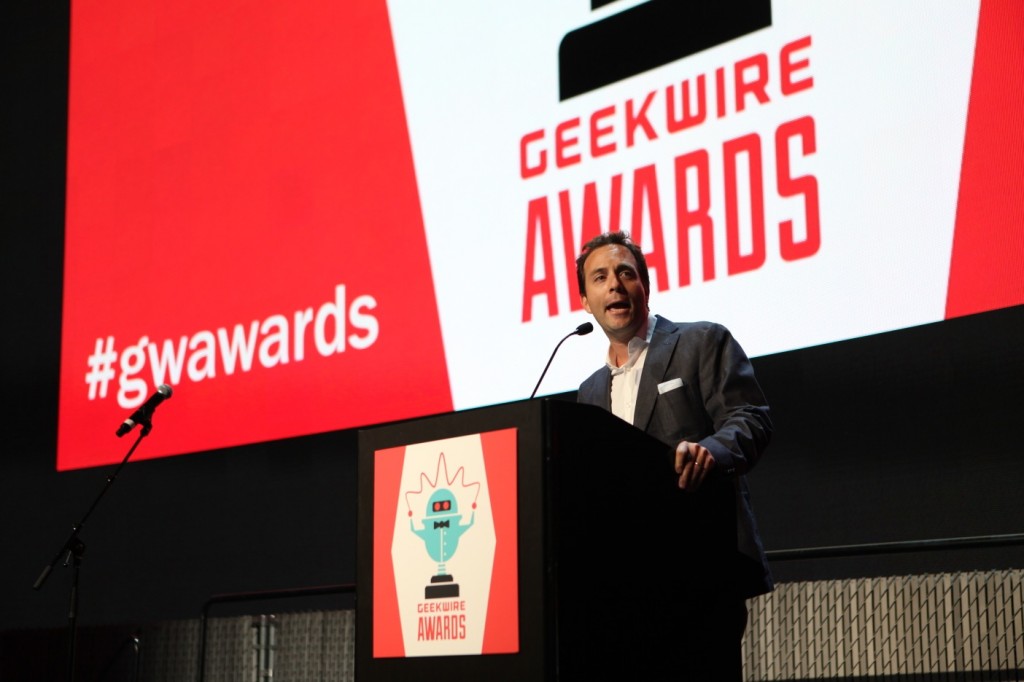 In my mind, it’s because there are enough of us weirdos here that we can hide in plain sight, like the mutant XMen finding strength in numbers at the Xavier Institute.

I think Seattle has the right balance of mutants and mortals…

…whereas the Bay Area is so overrun with people like us that they have attracted the picketers’ pitchforks.

I mean, can’t a developer and his cappuccino enjoy a WiFi-enabled bus ride in peace?

More importantly, though, I think the preponderance of technologists in the Valley causes them to lose sight of the real world.

Just because they use taskrabbit to pick up their laundry…

It does not mean that people in Peoria or Puyallup ever will.

Seattle, on the other hand, has just the right mix.

Like my secret recipe for Swedish chocolate chip pancakes, it has all the right ingredients.

Enough of us to feel part of the tribe.   But in small enough measure that we don’t, inadvertently, create an echo chamber bubble of boredom.

SO WHAT ARE THE TENETS OF OUR FAITH 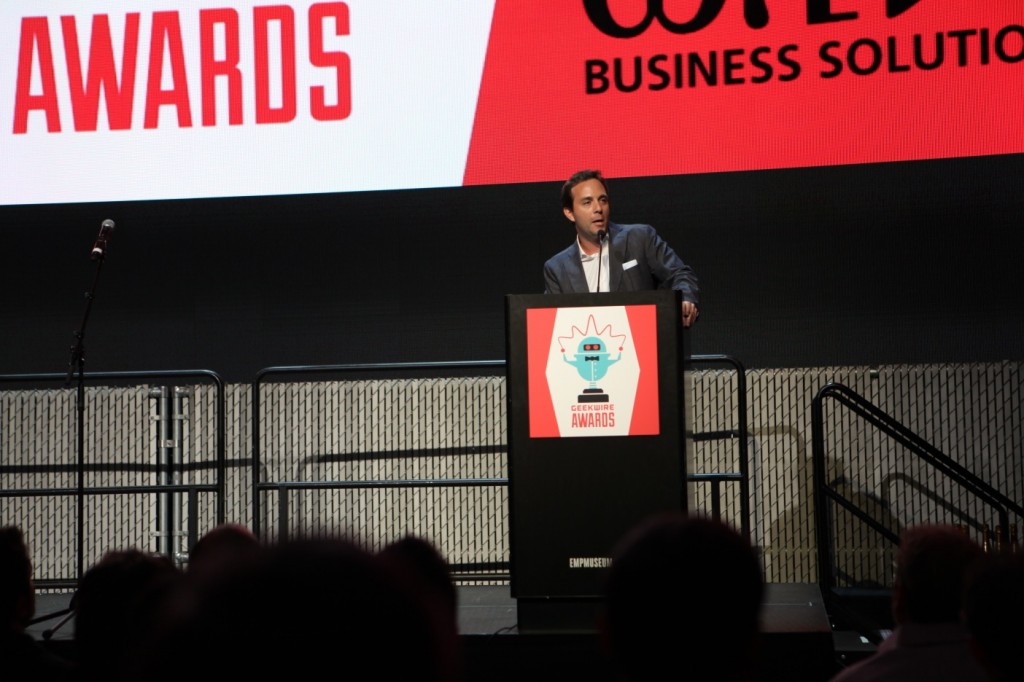 Within our merry band, what makes some citizens successful, while others run back to safety?

Unfortunately, most of these attributes are innate not learned. But they can be influenced.

They are akin to a sense of religion.  Some are born with a kernel of piety, and others are not.

But also like religion… with practice—with fidelity to these same three tenets: passion, faith, companionship—anyone can become religious, and more knowledgeable about their religion.

Just look at us…

Our tribe has its own chronicler in GeekWire.

We have our totems in Microsoft, Amazon, and hopefully, someday Zillow and Zulily.

And we have our clergy in one another—revealing… reveling in… and relaying the gospel from touchscreen-tablet to tablet.

But enough of the proselytizing.  Onto the evangelizing.

SO WHAT’S OUR CALL TO ACTION

Because here, tonight—preaching to the converted—I ask you to do something:

But as you move forward—carving out your own entrepreneurial path —I hope you’ll reach back.

A few years ago, I visited my old fraternity at Harvard.

I spoke with 40 bright young men, told them my story, and begged them not to follow the herd to Wall Street. I told them how I followed the siren song to Goldman Sachs and then had to break free from its tentacles and move 3000 miles west just to reinvent myself and find professional happiness in a world that creates rather than stay in the vacuous casino of Wall Street.

I said… Go West. Work in tech. Start something.  Build something.

Create something of value; if it becomes valuable, great. But be happy that it at least has value.

I implored them with all my powers of persuasion.

Two years later, I checked back.  I was zero for 40. Other than one or two doctors in the bunch, almost all of them had gone to Wall Street, and none had followed my advice to carve their own path in tech.

Hell, my own brother—a junior at Dartmouth—is going to work for the vampire squid this summer:

To me, this is more than a sad illustration—or an invitation for my mom to tell me, “be nice to your brother.”

It reflects our collective moral failure.  The atrophy of our country’s intrepid spirit.

It’s a testament to the triumph of accumulation over ambition and aspiration.

It’s the indicator of an epidemic—the ultimate brain drain out of medicine, education, entrepreneurship… a great migration from college to the casino.

So, let’s do something about it.

Win, lose, or draw… I hope when you leave here, tonight, you’ll commit to telling one person in your life to do something professionally unconventional… to dare to be uncomfortable.

Ask them to consider a career outside of the mainstream.  Ask them to push the human race forward, instead of falling back in line. Ask them to follow you into technology, where innovation and exploration are moving the world forward.

This is what GeekWire is all about.

This is what John and Todd—in partnership with Jonathan—intended for this community to be, and to do.

The marriage of entrepreneurialism with community.

Choose to work at companies teetering on the precipice of insolvency.

Because in your life and your work, you embody a powerful idea.

The future doesn’t belong to the miserable phonies… living a Dilbert-like Office-Space existence… toiling away in the bowels of some soulless behemoth… cogs in a wheel of someone else’s creation.

No.  Fortune favors the bold… the geeks… rich in passion, faith, and companionship in this community.

After all, no one can start a revolution without first taking a risk.

Congratulations to you all.  You’ve taken the first step by choosing a career in tech. Here’s to you, let’s raise a glass to my fellow geeks – go forth and conquer.

Related: Video: Seattle, A History of Innovation — from Boeing to Zillow and beyond