Last night’s GeekWire Awards in Seattle celebrated the top technologies, people and companies in the Pacific Northwest in 2014 — but we started by putting everything in a much broader historical context. 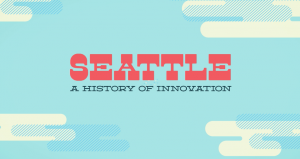 The team at Killer Infographics created this motion graphic for the event, in collaboration with GeekWire, tracing the roots of innovation in the Seattle region from the early days of UPS and Boeing up through Microsoft and Amazon and the emergence of newer public tech companies including Zillow and Zulily. (Make sure to watch it full screen).

This is one reason why it’s so much fun covering technology in a place like Seattle — watching and chronicling the rise of these companies and the impact of their ideas on the world. As my colleague John Cook mentioned on stage, the closing montage is enough to give a person chills, seeing the broad swath of Seattle-area startups aiming to become the next tech titans from the region.

Killer Infographics also created the fun motion graphics that introduced each category at the awards last night, featuring our robot mascot. Check out more of their work here, and also see the “Adventure of the Startup Kid” video that the Killer team produced for last year’s awards.

Thanks to everyone who attended the event last night. If you missed it, or want to relive the night, you can check out the archive of the live feed (courtesy Bootstrapper Studios) and our recap of the winners and Zillow CEO Spencer Rascoff’s keynote speech.