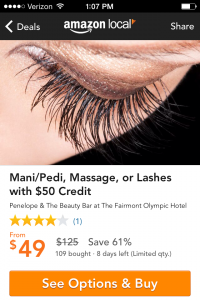 Amazon has quietly launched the ability for customers to write reviews for local restaurants, spas and activities, putting it squarely in competition with other online services, like Yelp, Angie’s List or Google’s Zagat.

The reviews capability rolled out last month, part of an iPhone app update for Amazon Local, which sells daily deals, similar to Groupon. According to the iOS app logs, the primarily purpose of the update, which went live on May 7, was to “support reading and writing customer reviews of some deal locations.”

This provides additional evidence that Amazon is close to launching a local marketplace, which would help people find babysitters, handymen or contractors. Reuters broke that news yesterday, but it wasn’t clear at the time that some of the features had already launched.

According to one source, the service is expected to launch officially by the end of this year, although that could be moved up.

The reviews are just what you’d expect. 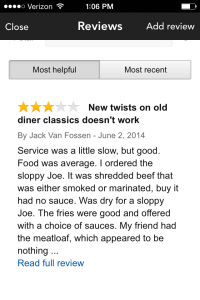 A deal for Lost Lake Cafe in Seattle, offering $12 for $24 off a meal, got three stars from a customer, who wrote: “New twists on old diner classics doesn’t work,” and that the service was slow and the sloppy Joe average.

A review for a different restaurant missed the point and instead of writing about the restaurant, complained about the couponing service. The reviewer wrote that at one location things went smoothly, but redeeming the offer at the second location led to a long wait and a clerk having to call his boss.

Coincidentally, Groupon does the same thing in its iPhone app through a partnership with Yelp.

Yelp and Google are probably not worried — yet. Over the past month, Amazon has gathered only a handful of reviews for businesses related to the dozen-or-so offers that were live today, so it still has a long ways to go.

But Amazon’s entrance into the space should be taken seriously, especially as customers have grown to trust the company as one of the major sources of reviews for physical products, ranging from cameras or a pair of jeans.

Amazon will have to start over if it wants to be the go-to source for local services, like contractors or restaurants, but clearly it has begun to put the pieces together. In addition to gathering the reviews, it has also been testing other services for awhile now, like helping you mount a flat screen TV in your home after buying one online.