Every four years, for one month, soccer fans around the globe crowd around a TV to watch all the exciting matches happening on the World Cup pitch.

Nowadays, though, TVs aren’t the only way to catch all the fútbol action — streaming video online lets us enjoy the tournament while in front of a computer, or on the go with our mobile devices.

This year there are plenty of options to watch your country compete in Brazil at the 2014 FIFA World Cup, even if you don’t have a cable subscription.

Without further ado — the tournament’s first match is on Thursday at 1 p.m PST — here are some options:

ESPN: ESPN is streaming all 64 matches at WatchESPN.com and via the WatchESPN mobile apps (Android, iOS, Windows 8, Kindle Fire, Fire TV, Chromecast, Roku, Xbox One, Xbox 360). You’ll need a cable subscription that includes ESPN from one of these providers to access the ESPN feeds. 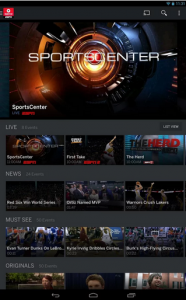 ESPN Radio is also broadcasting every match. The app is available on iOS, Android and Windows. You can also see local affiliates here, and use the TuneIn app to listen.

Univision: Though Univision is broadcasting its matches in Spanish, the cable company is streaming the first 56 matches for free — yep, even if you don’t have a cable subscription, you can still watch with Univision on its website, iOS app, and Android app. The quarterfinals, semifinals and final match will require a cable subscription — Comcast customers, however, won’t have access since Comcast does not carry Univision Deportes. If you fall into this camp, I’d recommend just using WatchESPN.

Other options: There are a few other options, particularly for those that don’t have cable. You can try something like Aereo, which charges a small fee to stream live TV.

If you live in Canada (CBC), the U.K. (BBC), Ireland (RTE) or Australia (SBS), you’re in luck — those respective stations will stream every game online for free, with no subscription requirements. If you don’t live in those countries, the streams will be blocked. Although a bit risky, you can try a VPN like Hola, TunnelBear, or Cloak to get around the block.

Editor’s note: Love soccer? Make sure to join the fun in the GeekWire World Cup Challenge.