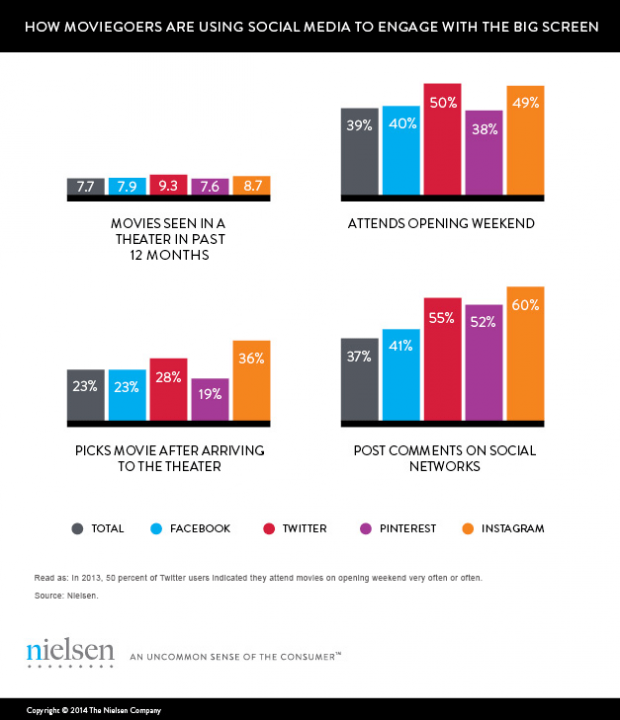 Social media tools are changing the movie theater experience before, during and after seeing a flick on the big screen.

Nielsen’s annual American Moviegoing report shows specifically how moviegoers are interacting with platforms like Facebook and Twitter. Before deciding which movie to see, 40 percent of those polled said they value recommendations they see posted by friends or family on social media — only a few notches below the 44 percent who said they rely on movie trailers when picking a flick.

After seeing a movie, Facebook users liked or followed a movie 25 percent of the time. The same goes for Twitter users, with 25 percent of moviegoers tweeting about the movie they just saw. Those on Twitter are also 25 percent more likely than other social media users to see a movie during its opening weekend, and 55 percent said they tweet about movies regularly.

But while social media has influenced movie theater behavior, review websites like Amazon-owned IMDb and RottenTomatoes.com still have value. Nielsen found that 41 percent of millennials check the average critic rating online before seeing a movie. In addition, eight of ten moviegoers said they read reviews at least some of the time before deciding on a motion picture.

It will be interesting to see how marketing execs at movie giants use social media to attract more viewers. The “second-screen experience,” is often mentioned during TV watching, but not so much while watching the big screen since it’s considered poor etiquette to take your phone out at the theater. However, this study notes that a majority of 18-to-34 year-olds think that using a second screen would enhance their experience at the movie theater — perhaps the “please silence your cell phone” messages before a movie begins will soon be extinct.