Twitter has been down for the past 15 minutes or so. We’ve been unable to update our feeds from both the Twitter homepage and third party clients like TweetDeck.

Twitter’s homepage notes that the site is “currently down for maintenance.” The Twitter Status page just posted that “most users are experiencing issues accessing Twitter on web and mobile apps. We’re looking into it.”

A quick check over at Google+ indicates many others having similar problems. I’m seeing a few tweets come through via Tweetdeck — like the one below from Re/code’s Mike Isaac — but Twitter is obviously having issues.

If you really need to tweet, you can use SMS to send messages. Aviel Ginzburg, CPO of Seattle-based social media analytics company Simply Measured, just figured this out: 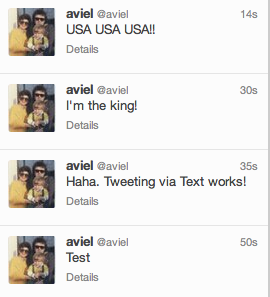 Twitter has had service issues periodically for the past few months, none lasting longer than 20 or 30 minutes. But whether it’s one minute or an hour, you can bet that at least some Twitter users around the world are freaking out a little now that they can’t tweet about their lunchtime meal.

We’ll update this story as we learn more.

It seems many people are seeing normal functionality and can send tweets now. The Twitter Status page has not been updated, though, and a quick look at downforeveryoneorjustme.com notes that Twitter is still down.

By last count, Twitter reported that there were more than 500 million tweets sent per day on its service. So an hour-long outage today means about 20 million or so tweets were unable to show up online.

During a planned deploy in one of our core services, we experienced unexpected complications that made Twitter unavailable for many users starting at 11:01am. We rolled back the change as soon as we identified the issue and began a controlled recovery to ensure stability of other parts of the service. The site was fully recovered by 11:47am PDT. We apologize for the inconvenience.

Most users are experiencing issues accessing Twitter on web and mobile apps. We’re looking into it.