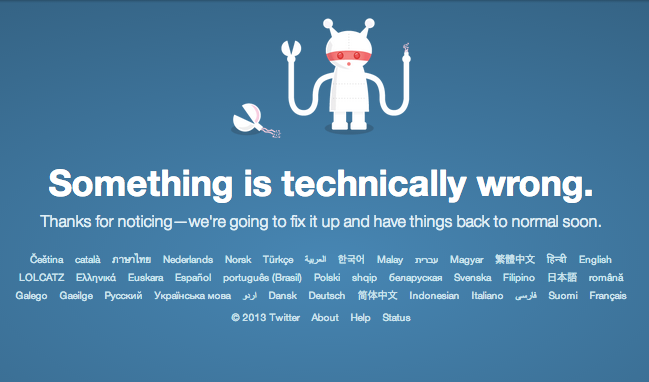 We reached out to Twitter to find out more and they directed us to this status page. It does not appear that Twitter’s mobile app was affected, nor were third-party apps like TweetDeck. We know this because people were still tweeting while the main site was down and freaking out, even though they could still tweet and read their timelines. Check out some of the crazies below to see what I’m talking about.

On a more serious note, this summer has been full of outages. Instagram, Vine, Airbnb, Flipboard and several others went down on Aug. 25 for about two hours after an Amazon Web Services server issue. Meanwhile, Amazon.com went down for 40 minutes a few weeks ago, presumably costing the Seattle online giant millions in sales. Two days before that, all of Google’s services went down for five minutes. The New York Times also went down for two hours three weeks ago — and was also hacked last week — while GitHub also experienced outages.

And now for the crazies:

FML! Twitter goes down and now my tv is down! I just want a bit mma action!! :(