The perceived threat by foreign companies on U.S. tech giants is totally over hyped.

Or, at least, that was the opinion floated yesterday by Twitter’s Co-Founder Evan Williams at the Quartz conference in Seattle. In general, the idea contrasts with conventional wisdom, which suggests that U.S. tech giants are vulnerable to technology companies from far-flung markets, particularly from places like Asia.

“It turns out the world is a big place, and in all kinds of industries, it’s rare for one company or service to dominate the entire word,” Williams said. “So, it doesn’t feel like the Internet should be any different, even though there are network effects, and in theory, people want to be connected all over the globe. I think these things can be pretty big, and global, and not threaten each other.”

The most recent example of this perceived threat is by Alibaba, the Chinese tech conglomerate that is preparing to host one of the largest U.S. public offerings ever. Depending on the day, any number of companies, including eBay, PayPal, Amazon or Google, could find its U.S. entrance intimidating.

But Williams said there’s very little evidence of a threat so far, although he was speaking generally, and tried to avoided naming specific companies, and particularly Twitter, since he is a member of the board and not allowed to provide any forward-looking statements.

“We haven’t seen that much crossover from Asia to the U.S. or vice versa in terms of Internet services, pre-or-post-mobile,” he said. “We’ll see if that changes as they come over here, and they have the advantage of being further ahead in mobile development and mobile culture. There’s a few core services that are replicated and will remain very large, just like there’s several large telecom companies in the world — there’s not millions or even hundreds, but there’s more than two.” 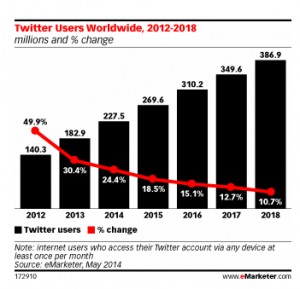 Meanwhile, one of Twitter’s biggest opportunities today for growth is to expand internationally. Just last week, eMarketer reported that Twitter’s growth is going to be heavily weighted in emerging markets, and particularly, India and Indonesia, which will become the third- and fourth-largest Twitter populations in the world this year.

As Twitter’s growth in the U.S. matures, and tapers off into the single digits next year, international markets become even more critical.

Despite his feelings that the global threat to U.S. companies might be overstated, he did acknowledge that the center of influence is shifting. “It’s clear the Internet is no longer this thing we made in the U.S. and we get to dominate it,” he said.