Graduates of Code Fellows’s iOS Development Accelerator programs this year will be on the cutting edge when it comes to developing apps for the iPhone and iPad.

The company announced today that its iOS development curriculum will now be focused on developing apps using Swift, the new programming language that Apple unveiled at its Worldwide Developer Conference yesterday. For the past 20 years, people interested in developing for the Mac and iPhone needed to know Objective-C, but they can now choose to build apps for iOS 8 using Apple’s new language, that comes with a variety of new features.

Students will also learn how to read and work with Objective-C, so they can understand legacy codebases for existing iOS apps, as well as code new ones. That’s a key point for students who are going to be placed with companies that already make iOS apps.

“We make sure that our students get deep knowledge in the most current technologies – like Swift – and we teach them how to learn so that they can work in both legacy systems and new stacks in the future,” Code Fellows CEO Kristin Smith said in an email to GeekWire. 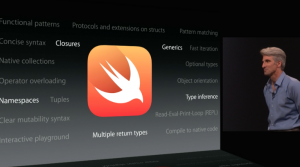 One of the key new features in Swift that should be especially appealing to new iOS developers is the ability to view the output of code inside a “Playground” in Apple’s Xcode developer environment. That way, coders can see exactly how the changes they make in the code affect their final product. In addition, Swift code can be compiled alongside Objective-C and C inside one project, so developers can slowly change their codebase over to Apple’s new language.

Experienced iOS developers interested in getting a crash course in Swift can sign up for a two-day intensive from Code Fellows that will be taking place later this year. People interested in the course can sign up to receive more information here.