Yes, deal making is happening with a furious pace right now in the technology industry — something we’ve certainly noticed in recent months.

In fact, according to EY’s Global Technology M&A update, there were more tech acquisitions (923 deals) during the third quarter than any time since the dot-com boom era. The third quarter marked the fifth consecutive quarter of deal growth. And two of the top five acquisitions — Zillow’s planned $3.5 billion acquisition of Trulia and SAP’s pending deal to buy Concur for $8.3 billion — involved Seattle area companies.

One factor driving the increase in deal-making is the enormous cash piles of big tech companies, as this chart shows. 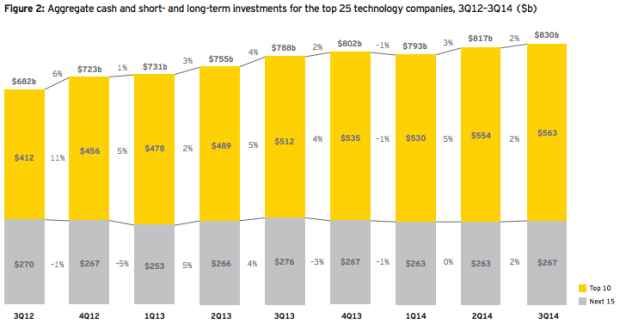 “Global technology M&A is in motion — it is growing and setting records. And to borrow from Sir Isaac Newton, it will tend to stay in that motion unless some outside force slows it down.”

“Global technology M&A is in motion — it is growing and setting records,” said Jeff Liu, global technology industry transaction advisory services leader at EY. “And to borrow from Sir Isaac Newton, it will tend to stay in that motion unless some outside force slows it down.”

The aggregate disclosed deal value for the quarter came in at $73.7 billion — up four percent year-over-year. The quarter also saw 19 deals with values of $1 billion or more, an all-time quarterly record.

Coinciding with the M&A report, EY also released data from its Capital Confidence Barometer, finding that 96 percent tech execs surveyed expressed confidence that the global economy is stable or improving. Fifty nine percent of respondents said that the global M&A market will improve in the next 12 months, while 40 percent said it will remain at current levels.

While the M&A market is causing some to talk about another bubble, the EY report says something different is going on from the excesses of the dot-com era. The report notes:

Reflecting the diverse influence of disruptive digital technology innovation throughout the global economy, technology M&A in 3Q14 reached heights of volume and value not seen since the dotcom bubble. But this time there was a significant difference from that earlier period: prices and premiums for 3Q14 deals can be calculated based on revenue and profit, not site visitors and page views.

Here’s a look at the top deals for the quarter. 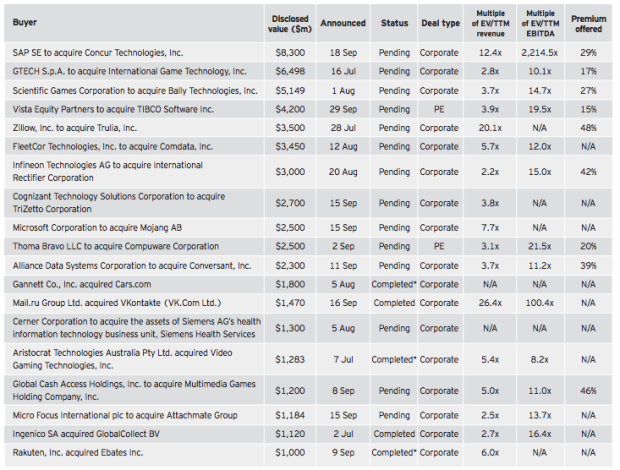