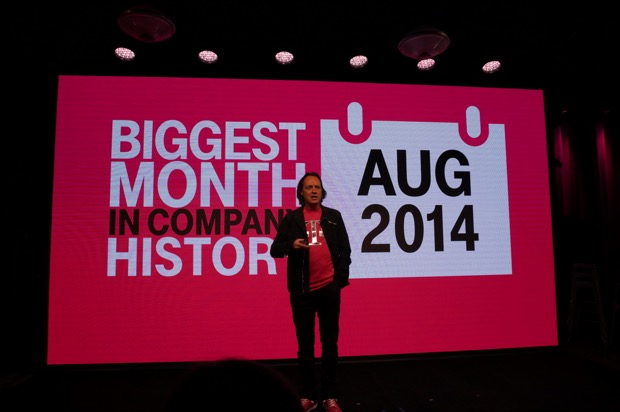 There’s no denying that T-Mobile had a great summer, but how is it doing now that a pricing war is under way?

That will become more clear after the company reports third-quarter earnings tonight at 6 p.m. PT. Shortly after the release, CEO John Legere is scheduled to appear at 7:30 p.m. PT at the Code/Mobile Conference in Half Moon Bay, Calif. to discuss results. A more official accounting will take place tomorrow at 8 a.m. PT during the company’s regularly scheduled conference call. 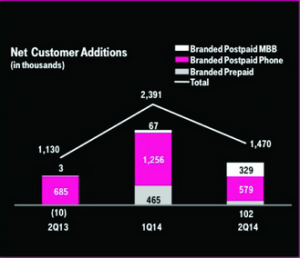 In August, T-Mobile celebrated breaking records after adding more customers in one month than in the company’s entire history. In July, it was equally bullish on its prospects, saying it expected to add between 3 and 3.5 million new subscribers (up from 2.8 to 3.3 million).

But all of this came before Sprint started rolling aggressive new rate plans in late-August, which even caused even AT&T and even Verizon Wireless to respond. With an all-out pricing war in effect, it’s unclear how T-Mobile performed in September, which will have a critical impact on the company’s third quarter performance.

On average, analysts are expecting the company to report a profit of 3 cents a share.

In the prior quarter, the company reported a profit of $391 million, or 49 cents a share, largely thanks to a spectrum licensing deal with Verizon, which paid T-Mobile $731 million. It celebrated the second quarter with slightly more than 50.5 million customers, adding 1.5 million customer additions for the period, resulting in the fifth quarter in a row of more than one million net new customers.

Without a doubt, investors would like to see that streak continue.

In early October when Legere appeared at the GeekWire Summit, he hinted the company was remaining competitive. 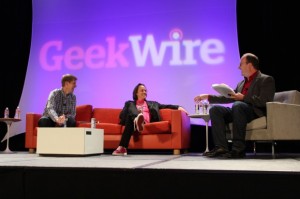 “I’m tempted to tell you about September,” he said, jokingly. “There’s a lot going on in the wireless industry that can be explained by what’s happening in the competitive environment. We are kicking the shit out of these guys right now.”

According to recent research, Sprint’s new plans are working. In a report compiled by Consumer Intelligence Research Partners, it found that Sprint beat T-Mobile in the third quarter, by attracting the highest percentage of new customers at 43 percent. Meanwhile, T-Mobile attracted slightly less at 39 percent.

Sprint, which has continued a steady drumbeat of special offers in September and October, will report earnings on Nov. 3, so we won’t know immediately if that report is accurate, or was dealing with too small of a sample size given how close the numbers were for the period.

T-Mobile fancies itself for doing things a little differently.

Mostly, it’s gotten that reputation for its Un-Carrier marketing campaign, which tries upsetting the status quo. Two recent offerings now allow people to test an iPhone on T-Mobile’s network for a week without any commitments. It also launched a new program that gives customers unlimited music streaming without data limits.

So, in that vein, T-Mobile also plans to mix things up for its earnings call.

For the first time, it says scripted remarks will be kept to a minimum to make more time for “free-flowing dialogue with analysts, investors, and media on the call.” The company, which has a reputation for its presence on Twitter, will be taking questions via the social network at @TMobileIR.

“We’re bringing the Un-carrier approach to quarterly earnings calls,” Legere said, in a press release. “We’re replacing the drone of endless scripts with open exchanges with investors, analysts and the media. And we’re doing it with mainstream, real-time, easily accessible social media like Twitter.”

In the lead up to the release tonight, T-Mobile’s stock is trading essentially flat at $27.99 a share.