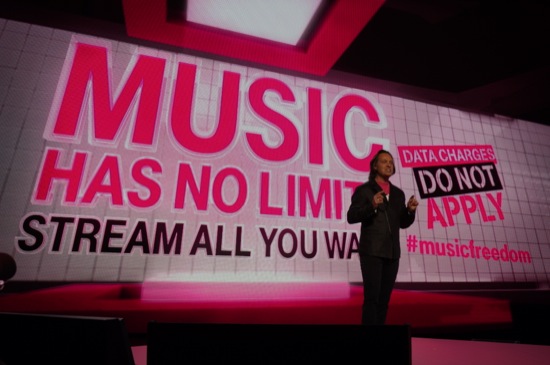 T-Mobile is launching a new program that will give its customers unlimited music streaming without data limits. CEO John Legere just announced the initiative on stage at the company’s event in Seattle.

The initiative will work with Pandora, Rhapsody, iHeart Radio, iTunes Radio, Slacker and Spotify, among others.

In addition, the company announced a new partnership with Rhapsody, the Seattle-based music service. The service, called unRadio, will be available at no charge to customers on the latest T-Mobile Simple Choice unlimited plans, and $4/month for other T-Mobile customers.

It’s the latest move by the company to upend the traditional wireless industry and win new customers. Legere predicted that this move will cause customers of other wireless carriers ask for unlimited music streaming, as well.

“Customers are going to demand the answer, as to why can’t I have this from you, as well,” he said.

The announcement came at the company’s “Uncarrier 5.0” event in Seattle, but this was actually “Uncarrier 6.0.” The company earlier in the evening announced a new “Test Drive” program that will give customers of other carriers the ability to have a “7 Night Stand” with T-Mobile, using the service with a loaned iPhone for a week.

The event is ongoing. See our live blog for more.