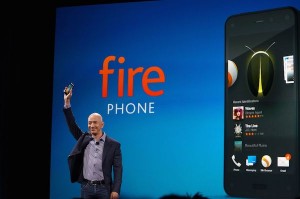 Amazon’s Fire Phone won’t be a repeat of the Facebook phone, or heaven forbid, the Microsoft Kin.

At least, that’s what Amazon Kindle VP Ian Freed implied following the announcement today that the e-commerce giant was going head-to-head with smartphones from Apple, Samsung and many others.

“We are completely 100 percent dedicated,” he said, during an interview with GeekWire. “I spent four years of my life on this, with a number of people from all over the company.”

But, it’s easier said than done. Over the past decade, we’ve seen spectacular flops, like Microsoft’s Kin phone, which targeted the teen market, and more recently with the Facebook phone, called the HTC First.

But the decision to enter the cellphone market wasn’t taken lightly, Freed said.

“We did it as soon as we knew we had an idea. As Jeff [Bezos] pointed out in the presentation, we have a passionate customer base, we have had many years of experience producing great hardware, and a vast ecosystem of content. What we really wanted to do was invent,” he said. “We thought long and hard about some of the biggest inventions, and two of the biggest ones are Firefly and dynamic perspective. We are in this as like we would be in any multi-year, multi-decade business. That’s the way Amazon thinks about things.”

Indeed, Amazon is known for experimenting with new ideas and concepts, and letting them incubate for years. One example is Amazon Fresh, which only existed in Seattle for five years before expanding to new markets.

Freed borrowed an expression that Amazon’s Founder Jeff Bezos. He said new market opportunities are like planting seeds: “We plant many seeds for many types of bets and ideas, and the ones that are the largest don’t necessarily grow into big Oaks — even after seven or eight years. They’ll keep growing and growing. We are thinking long-term, it’s innovate and iterate.”

It will take more than patience for Amazon to compete with Apple and Samsung. And, Amazon likely knows that. It tried being a little different today, by unveiling a new 3D interface called “dynamic perspective” and Firefly, which allows you to scan millions of item.