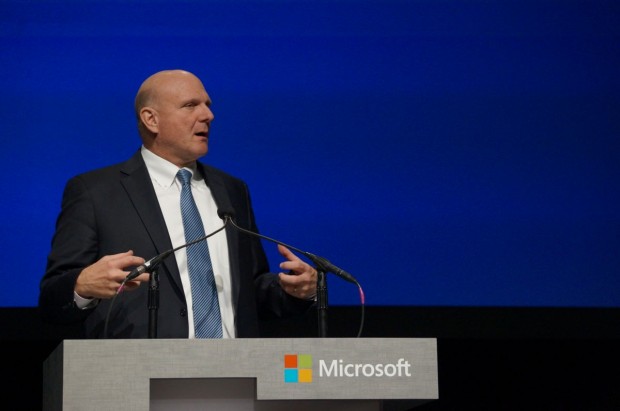 Even though he’s no longer the CEO, Steve Ballmer has some big ideas about how Microsoft should move forward. When the topic of the company he once ran came up during an interview at today’s WSJ Live conference in Malibu, Ballmer said that Microsoft should continue to make big bets on Xbox, Nokia and Surface in order to succeed.

Despite stepping down from the company’s board of directors a few months ago, Ballmer said that he’s still in touch with his successor, Microsoft CEO Satya Nadella, who he spoke with a few weeks ago. He said that he wants to be an appropriately engaged investor, and focus most of his energy on his current projects.

It was clear that Ballmer was more in the mood to discuss the Los Angeles Clippers, the basketball team that he purchased earlier this year for $2 billion, rather than his past tenure at Microsoft. Interviewer Monica Langley tried to goad him into introspection about his past at the company, but he said that he was “tired of looking back.”

Ballmer said that he left Nadella with a company that made a quarter of a trillion dollars over his tenure, along with strong businesses like enterprise software and machine learning, as well as the powerful Windows brand.

But even in his new role as the Clippers owner, Ballmer is keeping up his loyalty to the Redmond company. He said that any new tech gear the team buys will probably come from Microsoft, since he still holds a 4 percent stake in the company. (That squares with his decision to replace the team’s iPads with a new set of Surface Pro 3 tablets last month.)

Ballmer also noted some seriously high-tech ideas to spice up the Clippers’ game, talking about using analytics and machine learning to help the team improve its performance on the court.