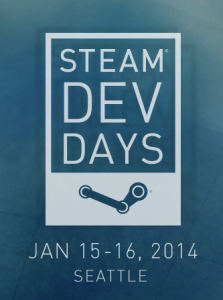 There’s certainly a lot going on right now for Valve, and today the Bellevue game company is meeting with developers to talk about its future.

Steam Dev Days, which kicked off this morning, is a closed-door two-day event that includes several sessions with representatives from Valve and other companies like Alienware, Icculus, Intel, Nvidia and AMD. Many of those talks will focus on helping developers prepare to build games for SteamOS, Valve’s new operating system designed for living rooms and based on Linux.

The conference comes at an important time for Valve as the company charges ahead with plans to upend the gaming industry. Just last week at CES, Valve CEO Gabe Newell unveiled 13 hardware partners that will make variations of the Linux-based Steam Machine, optimized for Valve’s dominant Steam computer gaming platform.

And there appear to be quite a few developers at the conference:

This pic is 40 minutes before the start and it’s already very full. People are pumped. #SteamDevDays pic.twitter.com/LhPnG4x5K5

Steam Dev Days is closed to the press, but we’ll be monitoring the social media streams to see if any news comes out in the next few days.