Most of the world’s top brands have utilized Twitter as a marketing tool, but some are doing better than others in terms of making the most out of their social media strategies.

The report, which analyzed tweets from both the Interbrand 100 and Forbes’ 100 Best Small Companies in America, found that 98 percent of the top brands were active on Twitter during the fourth quarter of 2013, while just 64 percent of small businesses could say the same.

The study also looked at what makes a tweet more effective in terms of engagement, as well as frequency habits. About 92 percent of the top brands tweeted more than once per day last quarter, while 44 percent of small business did the same. The top ten Interbrand companies averaged 1,562 tweets per month — more than four times the average of 380 tweets for the entire Interbrand list.

However, there was low correlation between tweet frequency and follower growth:

The study also found that both links and visual content are great for engagement on Twitter. Several top 10 brands — eBay, Amazon, Google, and Disney — all post tweets with links over 95 percent of the time.

Tweets that included a “pic.twitter.com” were the highest performing tweets, while “Tumblr.com,” “Pinterest.com,” and “Vine.co,” followed: 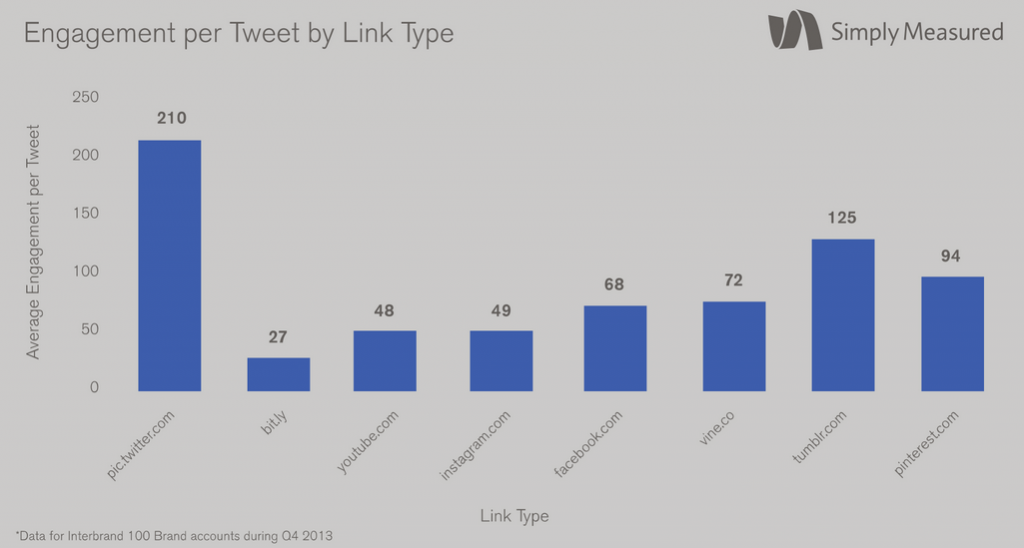 Finally, in terms of replying to individual tweets, 54 percent of Interbrand companies sent less than one “@reply” per day. Simply Measured noted that “while top brands are dedicating resources to brand promotion, many aren’t engaging with users in a one-on-one capacity.”