The venture capital business — which many have proclaimed is fundamentally broken — continues to contract amid changes in how capital is deployed to startup companies. The latest evidence comes via the National Venture Capital Association’s annual Yearbook, which shows a 25 percent drop over the past 10 years in the number of venture funds.

The number of firms also has declined during that period, down eight percent.

However, the number of new funds raising money actually increased.

Of course, the venture industry was coming off historic highs in the dot-com boom periods of 1999 and 2000. A total of 951 firms were operating in 2003, compared to 874 at the end of 2013. The number of funds, meanwhile, decreased from 1,788 to 1,331 — a trend we’ve seen play out in Seattle as established firms such as OVP Venture Partners and Frazier Technology Ventures decided not to raise new funds.

The report notes that 2013 continued to be a very challenging fundraising year for most venture capital firms in the United States.

“This was due to a lack of recent distributions caused by the tight exit markets, lackluster returns by many venture funds over the past decade compared with the prior decade, and a challenge for the largest alternative asset investors to place money in many of the smaller funds in this asset class because of scale,” the report says. 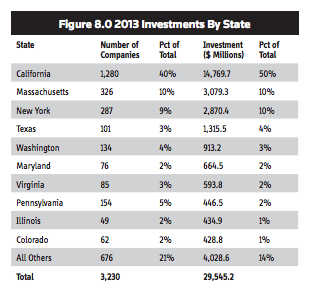 We’ve noted before that the rich just keep getting richer in the VC business, with the top performing firms controlling more of the dollars.

The changing tides were in evidence in today’s press release. NVCA president Bobby Franklin noted that — despite the “changing dynamics” — the “beat goes on” whether it be traditional venture capital, corporate venture capital, growth equity or new investment options.

Even with the VC industry contracting, the amount of money flowing to companies continues to stay relatively steady in the $20 billion to $30 billion range. Last year, $29 billion was invested, with software companies accounting for 37 percent of the total.

Washington state ranked fifth in terms of investments and fourth in terms of deals in 2013, behind leaders such as California, Massachusetts and New York.