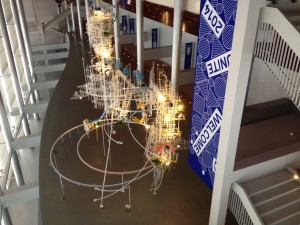 More than a thousand video game developers are in Seattle today, but nope, it’s not for the Penny Arcade Expo or Emerald City Comicon. Rather, 1,500 people are here this week to attend Unite 2014, the sold-out developer conference for San Francisco-based Unity Technologies.

Unity isn’t a name most consumers would recognize, but its technology is used behind-the-scenes by thousands of developers to build games for computers, phones and consoles.

In fact, there’s a good chance you’ve played a game that’s been made using its development engine.

Unity Technologies CEO David Helgason announced onstage this morning that 639,000 developers are now using the game engine on a monthly basis, and that mobile games using Unity have now been downloaded 8.7 billion times.

“It’s mind-blowing to think about it. We would need 400 rooms like this to host all these people,” he said. “The industry we are in is really f—ing big.”

Another metric Unity is announcing today shows how prominent the company has become: 47 percent of mobile developers use Unity, and more than 45 percent of mobile games created with third-party engines are made with Unity.

One of the notable aspects of the Unity engine is that it makes moving games from one platform to another, like from Android devices and iPhones to the Xbox, relatively easy.

Many of the announcements being made today, beyond usage metrics, are technical and target the developer community. For example, Unity also said this morning it is making version 4.6 of its engine available in open beta, and is announcing that the user interface portion will be made available open source. This means developers will be able to use it, make updates to the code, and potentially share those updates with future versions.

The company is also announcing it has acquired Austin, Texas-based Tsugi, a startup focused on making the process of building, testing and deploying games fast. Terms of the deal were not disclosed, but the company said the acquisition will be used to help power a new service called Unity Cloud Build.

Todd Hooper, Unity’s VP of Online Services based in the company’s Seattle office, was slated to make the announcement on stage. “The goal of Cloud Build is to take the pain out of producing and maintaining successful cross-platform games,” he said in a news release. “By streamlining the production process in the cloud, Unity is putting studios large and small in a position to give more time toward their creative processes to deliver amazing games that keep gamers coming back for more.”