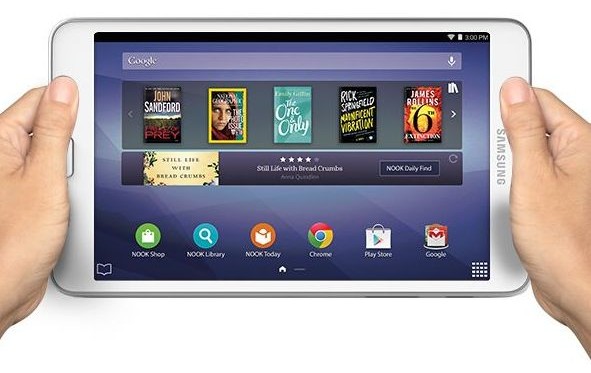 Hitting the reset button on its Nook tablet business, Barnes & Noble this morning unveiled its new Galaxy Tab 4 Nook in partnership with Samsung. The tablet comes with a 7 inch screen and 8 GB of onboard memory, along with a MicroSD card slot so that users can expand its storage capabilities. 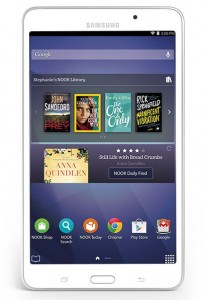 The tablet is available starting today for $179, although that price includes a $20 instant rebate from Barnes & Noble. As the name implies, it’s a co-branded version of the Galaxy Tab 4 7.0, and sports all of the same specs that device does. It’s an important update for the Nook, which saw its last hardware release in the winter of 2012.

The partnership between the two companies was first revealed in June, when Barnes & Noble and Samsung announced that they would be working together in order to try and bolster Barnes & Noble’s tablet lineup. B&N has said that it is no longer in the business of manufacturing its own tablets, and any future hardware for its e-reader platform will come from outside companies.

It’s a move to compete with Amazon’s popular Kindle Fire line of tablets that combine the Seattle-based company’s e-reader platform with an Android tablet running Amazon’s customized OS. Amazon is the undisputed leader of the e-book market, and it’s unclear if this push will improve Barnes & Noble’s standing at all.

The news comes after the Nook division suffered massive layoffs earlier this year, and Barnes & Noble recently announced that the Nook unit would be spun off into its own public company.