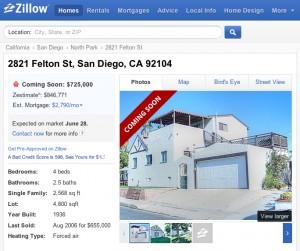 Not everyone is thrilled with Zillow’s new “Coming Soon” feature, an offering that launched earlier this month that allows real estate agents to generate buzz for properties before they are officially listed on any multiple listing service.

Doug Miller, executive director of Consumer Advocates in American Real Estate, took the feature to task in a guest commentary on Inman News calling it a “harmful practice that thrives on breaching trust” and “deceiving clients.”

Miller writes that the “Coming Soon” feature constitutes what’s called a “pocket listing” — a term for a listing that bypasses the multiple listing services.

“In almost all cases, pocket listings are harmful to consumers,” Miller writes. “They certainly do not serve their stated purpose of gauging the demand or pricing of a property before it hits the market — that is a ruse used to manipulate clients. If that were the case, putting it on Zillow would constitute “test marketing.” Putting it on Zillow is full‐blown marketing with one huge exception: Pocket listings exclude the brokerage community by refusing to share commissions. That’s bad for consumers and Realtors.”

In addition to the guest commentary on Inman, the real estate news publication also is running a poll asking readers whether they approve of the “Coming Soon” features on Zillow. As of Wednesday morning with more than 900 votes tallied, 71 percent of respondents said they did not approve.

Zillow, for its part, adamantly denies that it is trying to cut the real estate agent out the equation. In fact, Zillow’s Katie Curnutte calls the new feature an “antidote to pocket listings.”

“It shines a bright light on what’s traditionally been a dark, murky practice of pocket listings, where consumers don’t have access to all the available information,” says Curnutte. “Now, we’re turning on the lights for buyers and sellers, which is incredibly important for those in tight markets, like Seattle. Buyers are able to see these homes and make a more informed evaluation of current listings against what will soon be available. And this broadens the marketing exposure for sellers – allowing their homes to hit the market with more momentum — which has the potential to sell their home faster and for a better price.”

The Coming Soon service is available for free to Zillow Premier Agents and those brokerages that provide a direct feed to Zillow. Each listing can be pre-marketed for 30 days, and then extended for another 30 days. They will not exceed 60 days.

Could the new “Coming Soon” feature damage those efforts?