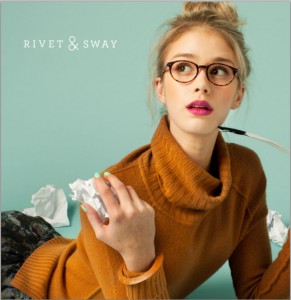 Seattle eyewear startup Rivet & Sway, which attempted to take on Warby Parker in the sale of prescription glasses over the Internet, has pulled the plug, according to messages on its Web site and Twitter account.

“We’re sad to announce that Rivet & Sway has sold its last pair of specs,” says a message on its Web site. “We set out to help women love the way they look in glasses, and it’s been a blast making it happen. A big, huge, giant, heartfelt thank you to every gal who found her perfect pair and got to experience the Joy of Specs. Here’s looking at you!”

No explanation was given for the closure, and we’ve reached out to the company for comment.

The company sold all of its frames for $199, offering free express shipping and a 60-day return policy. It targeted female shoppers, whereas Warby Parker targets both men and women.

Warby Parker also has raised more than $115 million venture financing, according to CrunchBase.

UPDATE: The inside story of Rivet & Sway: Why this online retailer closed its doors

Here’s the goodbye Tweet from Rivet & Sway, which was initially led by former WhitePages executive John Lusk. We’ll update this post with more information as we gather it.

We’re sad to announce that we’ve sold our last pair of specs. A heartfelt thank you to every gal who got to experience the Joy of Specs. xo