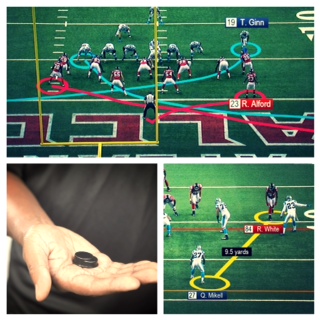 The NFL is getting a little more geeky this season.

With help from Illinois-based Zebra Technologies, the league is installing receivers in 17 stadiums that will track player movement thanks to two small RFID tags embedded inside the shoulder pads of every player.

This will allow the NFL to record real-time position data and information related to acceleration, speed, routes, and total distance run.

“Zebra’s tracking technology will help teams to evolve training, scouting and evaluation through increased knowledge of player performance, as well as provide ways for our teams and partners to enhance the fan experience,” Vishal Shah, NFL Vice President of Media Strategy, said in a statement.

As USA Today notes, the information from the trackers could end up on live broadcasts so that fans can enjoy deeper analysis on how fast or slow each player is moving. The NFL won’t allow teams to access the data this season while it tests the system because of competitive reasons, but that’s certainly in the long term plans.

The NFL isn’t the first league to do something this. Last year, the MLS installed three cameras in every stadium to track player movement. The NBA did something similar, too, when it signed a deal with STATS last year to gauge player fatigue, movement and other information not previously quantifiable.