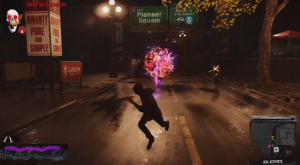 Ever wonder what it would be like to jump from building to building with neon power in Seattle, all the while using superpowers to eliminate the bad guys?

Thanks to the folks at Sucker Punch Productions, now you can. The Seattle-based game company just put out eight minutes of new game footage from inFAMOUS Second Son, the new PlayStation 4 exclusive title that hits shelves next week.

If you live in Seattle, or have in the past, it’s pretty fun watching Delsin Rowe, the 24-year-old main character, master his superhuman powers in a virtual downtown Seattle.

In the eight-minute snippet, you’ll recognize landmarks like the Space Needle and the turquoise paint that lines the underground bus tunnel. As Polygon notes here, everything from the game’s landscape design to the Seattle-area robins chirping is factually accurate.

Thanks to the PS4′s computing power, Sucker Punch was able to pour in some serious detail that captures Seattle’s atmosphere. Here’s how Horia Dociu, art director at Sucker Punch, described the development process back in January:

We wanted to give the player the feeling of walking down an alleyway and seeing the rain accumulate between the cobblestones, and the reflections of the rain-streaked, brick buildings and neon market signs. Or the feeling of looking up at the sun as it breaks through the clouds, sending rays of light through enormous pine trees. We challenged our team to create all the painstaking details of the atmosphere, architecture, and weather of Seattle, an open world complete with traffic, Seattle denizens wearing real, 3D-scanned clothing, expansive vistas, and destructible environments that are interactive with your powers. It’s also running at true 1080p.

Sucker Punch Productions was acquired by Sony in 2011. The studio, maker of inFamous 2 and Sly Cooper, was founded in 1997 and built its games almost exclusively for Sony’s PlayStation before becoming the 16th studio to join Sony Computer Entertainment.