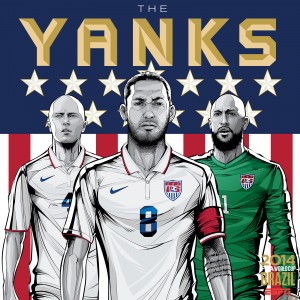 But Americans will hope that Microsoft’s pick for Tuesday’s big U.S. soccer match against Belgium is flat out wrong.

Microsoft Bing’s prediction engine, which had a success rate of 60 percent for the World Cup’s group stage, has calculated a 66 percent chance for Belgium to beat the U.S. tomorrow afternoon.

Given that Bing is 5-for-5 thus far in the knockout round, its prediction certainly has some validity. Though out of the remaining matches, Bing is least-confident about the U.S. match: 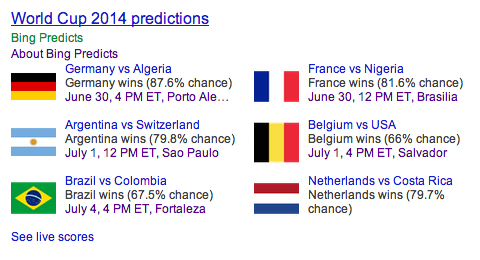 Microsoft, which has found success predicting other competitions in reality TV contests, is using data like the teams’ records, strength of schedule, margin of victory in past matches, whether the location gives a particular team a home field advantage, and the influence of factors including weather and type of playing surface.

The Redmond company has also added its World Cup prediction technology to Cortana, its voice-enabled virtual assistant that is powered by Bing:

#Cortana knows even more about soccer. I mean football. Now with predictions. pic.twitter.com/MzKUdT6pQd

You can see Cortana’s predictions by asking her, “Who will win Team A or Team B,” or see the same predictions on Bing by searching for “World Cup Predictions.”

The U.S. faces off against Belgium in an elimination game at 1 p.m. PT Tuesday. Here’s how to watch the match online for free.