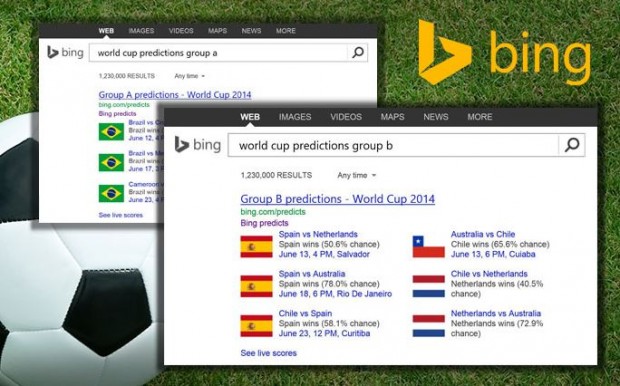 Microsoft Bing’s prediction engine, which was dead-on its past predictions for The Voice and Dancing with the Stars, is emerging from the group stage of the World Cup with a record of 29 accurate predictions and 19 misses, for a success rate of 60 percent.

All in all, the company says it’s satisfied with its outcome, given the unexpected twists and turns of the beautiful game.

“The tournament has been amazing so far and full of surprises, like Spain going home early and Costa Rica winning their group. Not only that, but it’s been incredibly exciting as the games have produced the most goals per game since 1970,” said Craig Beilinson, Microsoft Bing director, in an emailed statement.

“During the group stage we predicted 29 games correctly out of the 48 played, making us around 60% percent accurate. We’re obviously not on the level of the dearly departed Paul the Octopus, but we’re pretty happy with our results.”

In the case of reality television competitions, Microsoft was able to take into account the online buzz for a particular competitor as a direct indicator of the ultimate winner, given the role of the public in the outcome.

If only public voting determined the winners in sports!

In the absence of that, data used by Bing to make the World Cup predictions include the teams’ records, strength of schedule, margin of victory in past matches, whether the location gives a particular team a home field advantage, and the influence of factors including weather and type of playing surface. Bing says it is also double-checking its predictions against other “prediction markets” to make sure that its algorithm isn’t overlooking any late-breaking developments.

One of the promises of using data to make predictions is forecasting unexpected results, but Bing missed the big shockers of the group stage — the surprising success of the United States in Group G, and the shocking losses by past champ Spain in Group B.

Our resident World Cup guru, GeekWire’s John Cook, who accurately predicted 5 out of 8 top finishers in the group stage in GeekWire’s World Cup Twitter challenge, reviewed Bing’s results and concluded that Microsoft is “doing about as well as someone who sat down and just thoughtfully made their own picks.”

“In other words,” he said, “the prediction algorithm has a long way to go.”