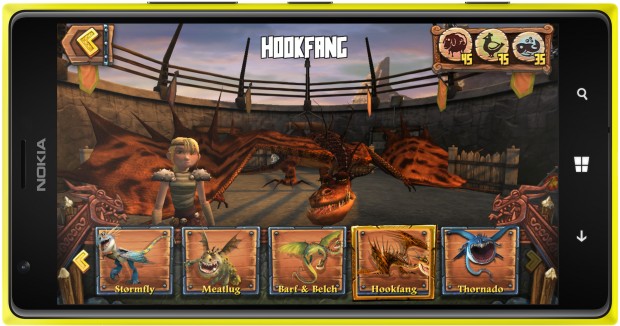 Playing a game on a phone or tablet on the couch is one thing, but a new game for Windows Phone and Windows tablets shows what can happen when a moving vehicle and real-world location are part of the mix.

The game, “Dragons Adventure: World Explorer,” is based on the “How to Train Your Dragon?” series, published by DreamWorks in partnership with Microsoft. It features a mode designed to be played by kids when they’re riding in the car — flying their digital dragon in an area around the vehicle (represented on the map in the game as a cart) by putting in the destination for their road trip and letting the game work its magic.

They can play as Hiccup or Astrid, the film’s male and female lead characters, and ride a variety of dragons from the film over a fantasy landscape generated by data from Nokia’s Here Maps service.

“What happens is it takes that destination and creates a personalized quest,” Pete Mauro, a Producer for Global Innovation and App Development at Microsoft, told GeekWire in an interview. “So, it knows where you’re going, it knows how long it takes to get there, it’s looking at traffic information and the route, so it has a progress bar that goes across, and when you arrive and you cross the finish line, the game is over, and (kids) hand the tablet back.”

I went on a ride-along with Mauro, and watched him navigate Toothless (the leading dragon from the film) over the game’s fictionalized version of the Bay Area, flying over nearby businesses, which all showed up by name as he passed over them. It definitely lent a sense of whimsy to the ride. It’s weird and fun to drive past a gas station that only moments ago played host to a digital siege tower that flung sheep at a dragon on a tablet screen. 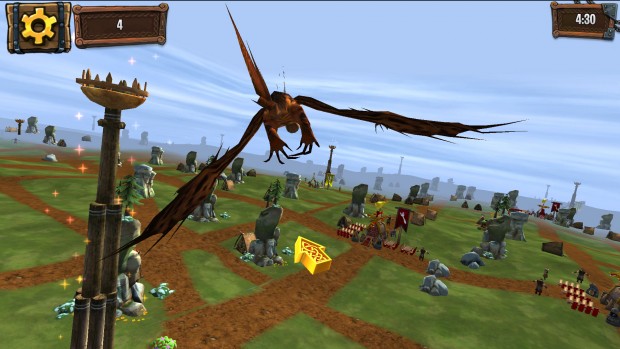 The in-vehicle “Train” mode does require that players download the map data to play, which means that parents either need to provide their kids with a device that is capable of getting on a cellular data network, or spend time in an area while on Wi-Fi to let the game cache the map it needs before taking off on the road.

Kids who want to play at home can follow through the game’s story with Explore mode, which lets them complete missions and fly over different regions in the world. One mission has kids flying over Washington, D.C., while another will take them over the fantasy world generated from Mexico City’s map. 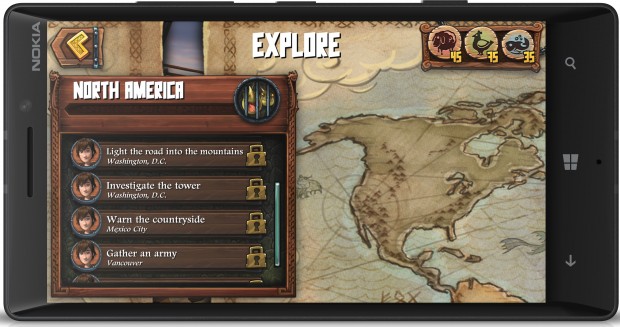 What’s more, Microsoft is looking to make those tools available for other game developers working with the Unity game engine. In the future, Mauro hopes that devs will be able to build the same location awareness tools that power Dragons Adventure into their other games, without having to negotiate a deal with Nokia, a deal with Foursquare and a deal with the Weather Channel.

“We gave it to developers as a test a couple months ago, and within one week, they took our dragon game and re-skinned it into this post-apocalyptic world just by changing the textures and the props and some of the assets in the game,” Mauro said. “So it’s really easy to take this and do something different with it.”

The game is available for free, and all of its features are available without any sort of in-app purchase. As for future monetization plans, Mauro said that it’s possible Microsoft may leverage the location awareness features in the game to serve special offers or other advertisements to players or their parents.

It’s unclear if Dragons Adventure will be a big enough hit to drive sales of Microsoft’s products, but it could help kick-start increased development of kids’ games for Windows tablets and Windows Phone.

Right now, Windows Phone isn’t anywhere close to competing with iOS or Android for smartphone market share in the U.S., and Windows tablets are seeing a fraction of the usage that the iPad is getting.