For many years, Microsoft was viewed as the dominant PC operating system vendor, with more than 90 percent market share on desktops and notebooks.

But the rise of computing on tablets and smartphones has turned the PC market into one slice of a much larger pie, and Microsoft chief operating officer Kevin Turner this morning told the company’s partners that they have to look at the world differently. Even though Microsoft still has 90 percent of the PC market, he said, the important figure is 14 percent, taking into account the entire world of devices.

“The reality is the world’s shifted, the world’s evolved,” said Turner at the company’s Worldwide Partner Conference in Washington, D.C. “We now measure ourself by total device space. We have a much bigger opportunity than we’ve ever had in the past to grow our business, but we have to rethink how we look at our business.”

Here’s the slide he showed on the big screen at the event. 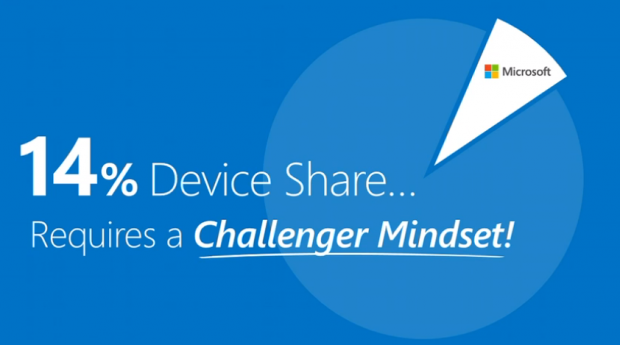 Turner echoed Microsoft CEO Satya Nadella, saying that Microsoft and its partners need to embrace a challenger mindset. This is a major philosophical change under Nadella’s leadership, and it’s manifesting itself in a variety of ways, including Microsoft being more open to releasing its apps across non-Windows devices such as the iPad and Android.

Turner said that means focusing on disruption, differentiation and speed across a variety of devices, leveraging Microsoft’s strength in cloud computing. Talking about Microsoft Azure and Office 365, he said the company has “tremendous cloud momentum.”

At the same time, Turner said the company is still focused on Windows, talking about the company’s efforts to create a common set of developer tools and a shared API and app store across all forms of Windows-based devices, from smartphones to PCs and Perceptive Pixel screens.

The event is ongoing, available here via webcast.