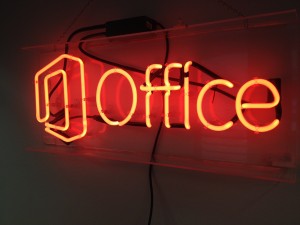 That was the hint dropped by John Case, a Microsoft Office corporate vice president for marketing, as part of a much broader conversation with GeekWire about the vision and strategy for the Office business. He pointed to the OneNote note-taking program as a past example of Microsoft adding an “incredible asset” by creating a new app, which now has millions of users.

“We’ll do more things like that, that will be about different form factors and different applications,” he said. “The Office suite has been very consistent. We haven’t had new apps in a long time. We’ll have some new app investments coming. New ways of creating content, new ways of storing and organizing content.”

He continued, “As much we love Word, Excel and PowerPoint, there’s another generation of app experiences we want to enable. Some of it will feel like big stuff, and some will feel like small stuff. We want to let you create content in different ways that we think will be more personal for you.”

I pressed for more information, but this was part of a more general discussion, and Case said we’d have to wait to find out the official details starting in the spring.

One interesting area to watch will be how these new “app experiences” will fit into Office 365’s cloud-based subscription model, and how they’ll take advantage of Windows 8 and cloud services such as OneDrive, particularly on touch-screen notebooks and tablets.