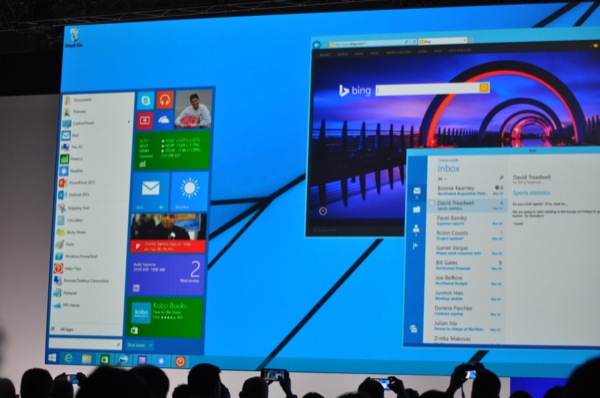 How’s this for a new era at Microsoft?

Microsoft operating systems chief Terry Myerson announced this morning that the company will be bringing a version of the traditional Start menu back to Windows 8 in a future update to the Microsoft operating system. The company had previously brought back the Start button, but clicking on it currently leads to the Start screen, not the traditional pop-up Start menu.

In addition, Myerson announced that universal Modern-style apps will be able to run in a window on the traditional desktop, not just in full-screen mode as now.

The surprise announcement came on stage at the company’s Build conference for software developers in San Francisco. (See this live blog by GeekWire’s Blair Hanley Frank on the scene.) Among other news, Myerson said that Windows will be free in the future on tablets and phones with screens smaller than 9 inches, and “Internet of Things” devices.

The removal of the traditional popup Start menu from Windows 8 was one of the biggest targets of criticism from longtime Windows users. Myerson showed the new menu on stage at the event but didn’t explain how it will work with Windows 8.1’s existing navigation mechanisms.