Windows 8 in its original incarnation wasn’t just a learning curve for traditional PC users, with their old-fashioned mice and keyboards. It was a completely foreign experience, designed for tablets, and disorienting on the desktop. 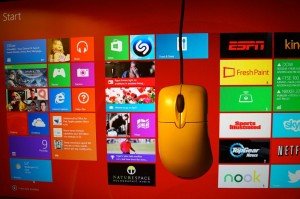 But now, on its third attempt, Microsoft is making its flagship product familiar again.

An updated version of Windows 8.1, officially announced by the Redmond company at its Build conference in San Francisco this morning, brings a series of changes that make the operating system more straightforward and easier to use on desktop and notebook computers.

This is just the start: In addition to this update, set for release next week, Microsoft this morning announced that a future update will bring back the traditional Start menu.

In the meantime, these are some of the new features slated for next week’s update.

Yes, Windows might finally be ready for the rest of us again.

A change for the better

I’ve been testing the Windows 8.1 Update with keyboard and mouse for the past day, and so far I’m finding it’s a much better experience than previous versions of Windows 8. I’ve become a fan of Windows 8 on the tablet, and with these changes to the desktop experience, I keep wondering what would have happened if Microsoft had made these accommodations for PC users from the beginning.

Scheduled for release next week, this is the latest in a series of after-the-fact attempts by Microsoft to make the tablet-oriented Windows 8 more palatable to keyboard-and-mouse users. The update builds on the earlier Windows 8.1 release to address the challenges inherent to Microsoft’s attempt serve both PC and tablet users with one operating system.

The move comes at a critical time for the company. Even as Microsoft tries to become more competitive in tablets and smartphones, the company is seeing new challenges to its traditional PC business, from Google and others. With Windows XP support officially reaching an end next week, many longtime Windows users are exploring their options, and Microsoft would, of course, prefer to sell them new Windows 8.1 machines.

“When we do the usability studies, if an XP or Windows 7 user shrugs her shoulders and says, ‘Big deal, nothing changed,’ we give each other a high-five,” says Chaitanya Sareen, principal program manager for Windows user experience.

How Windows knows your machine

Enabling the latest changes is a little-known but longstanding Windows setting known as “POWER_PLATFORM_ROLE.” Its official purpose is to let computer makers designate the machine’s power management configuration, depending on whether the machine is a notebook or desktop, for example.

As an added bonus, the setting can signal to the operating system what type of machine the operating system is running on, using a series of numerical codes. This is what Microsoft is relying on for many of the new changes. If the Power Management Role indicates that it’s a desktop or notebook computer, for example, Windows 8.1 will now boot to the Windows desktop by default, not to the more touch-oriented Start screen.

Among other changes, the traditional taskbar in the new Windows 8.1 Update will include an icon for the Windows Store app marketplace by default. Windows will still use the full-screen Modern interface to run the app, not run them in windows on the traditional desktop, but with the ability to pin Modern apps to the Windows taskbar, it’s possible to open and close the apps from the desktop without needing to go to the Start screen.

When users of desktop and notebook machines launch a full-screen Modern app in the Windows 8.1 Update, they will initially see a black title bar across the top, including the ability to press the familiar ‘X’ to close the app. It will then disappear, but can be reactivated by moving the mouse to the top of the screen — giving users the option to close the apps in the traditional way, rather than using Windows 8’s technique of ‘dragging’ the apps down off the screen to close them.

The free Windows 8.1 Update will be released starting April 8 for existing Windows 8.1 users, via Microsoft’s Automatic Update system. New PCs and notebooks are also expected to ship with these changes in the coming weeks and months, depending on each computer maker’s timeline.

The Windows team is aiming to improve the experience, but it’s impossible to please everyone. “We always joke, when you design for Windows, you’re ordering pizza for 1.5 billion people,” Sareen said. “There are lot of requests for different toppings.”